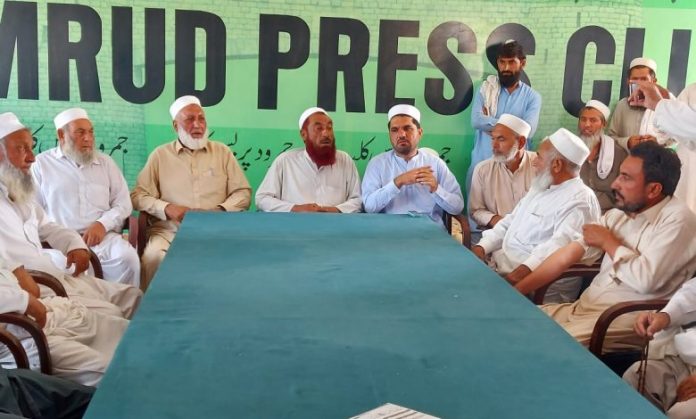 JAMRUD: The elders of Jamrud tehsil of Khyber tribal district have said handing over the lease of their area to outsiders is not acceptable to them and it is an unjust procedure which must be reversed.

Addressing a press conference at Jamrud Press Club on Tuesday, the elders of Kokikhel tribe (sub-tribe Asadkhel) including Malik Najeeb, Haji Baligh, Haji Aliman Shah, Rehmat Gul, Muhammad Noor, Naji Moez and others said the leases of their area in Tirah are being handed over to people of other areas. They said the people of Tirah have the right on lease of their area, and giving it to outsiders tantamount to deprivation of local people from their right and pushing them to hold protests. They said they have no permission to enter their own area, while some elements, while taking advantage of their absence, are handing over the leases of precious mineral resources and mountains.

The elders of Kokikhel tribe made it clear that any lease finalised in their absence will never be acceptable. They demanded the security forces and administration of Khyber district not to give any lease of their area to outsiders.

Asadkhel tribesmen said a lease in Rejgana area of Tirah has been given to a non-local person and the tribesmen are being asked not to raise the issue. They said they must not be deprived of their right otherwise they would rise against it and stage protests. They said they would block the Pak-Afghan Highway against this injustice. In that eventuality, they said, the responsibility of deterioration of situation will solely rest with the government.

Parents kidnapped their own son to get rid of loan in Charsadda.

A woman filed a case with Khanmai Police on May 25 that her son has been kidnapped. Police filed the case and initiated investigation.

Police said the parents were also included in the investigation and after little probe by police they told that they had to orchestrate a drama of kidnap of their own son to get rid of Rs400,000 loan. Police have arrested the parents of the boy and they have confessed to their crime.