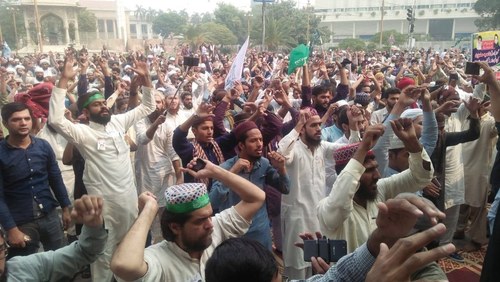 PESHAWAR: Supporters of Tehreek-e-Labaik Pakistan took to streets following acquittal of Asia Bibi acquittal in blasphemy case by the Supreme Court of Pakistan on Wednesday.

The protesters blocked roads including Ring Road, GT Road, Jamil Chowk, and staged protest outside Peshawar Press Club. The protesters chanted slogans against the government and the Supreme Court and demanded death for Asia.

Protests were also being staged in Gujranwala, Layyah, Chishtian, Mansehra, Mirpur in Azad Kashmir, and other cities across the country and Karachi.

Supporters of the Tehreek-e-Labbaik Pakistan (TLP) took to the streets in several parts of the country following a Supreme Court verdict acquitting Asia Bibi, a Christian woman sentenced to death over blasphemy allegations.

Protests were being staged in different cities including Karachi, Lahore and Islamabad, with major roads blocked.

Following the protests, Section 144 was imposed across Punjab, Sindh and Balochistan barring the gathering of more than four persons in public places as well as pillion riding. Section 144 has been imposed from October 31 to November 10.