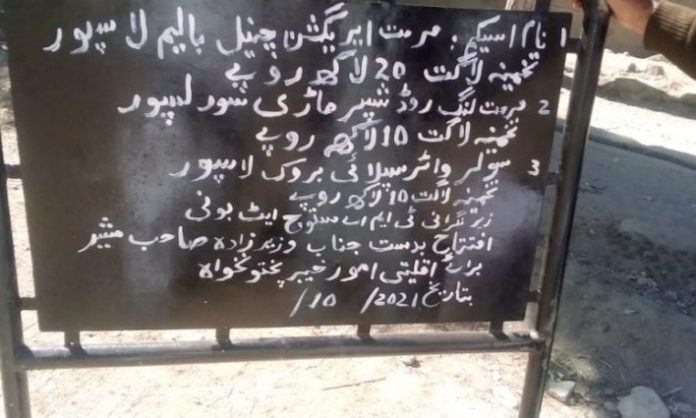 Mastuj tehsil municipal administration in Upper Chitral district has inaugurated a solar water supply scheme without even starting work on the project.

Sources told TNN that the water supply scheme was planned at the cost of Rs 1 million for Brok village of Laspur area. They said that Mastuj TMA had floated tenders for the project a year ago; however, work is yet to start on it.

Pakistan Tehrik Insaf’s local leader Fazluddin Joshi told TNN that the contract was awarded to a Lower Chitral’s contractor. He said that contractor did not bother to visit the project site even for once.

He said that TMA not only hoodwinked Mr Zada but also played a cruel joke with the people of Brok.

Mr Joshi demanded Deputy Commissioner Upper Chitral to take notice of this fraud and investigate it.

He said that it was strange that the special assistant inaugurated a non-existent water supply scheme.

Tehsil Municipal Officer Upper Chitral Muhammad Hanif said that they were unable to complete due to differences among local community. However, he had no answers for inaugurating an incomplete project.

Special Assistant to chief minister Wazir Zada did not respond to queries regarding the project.