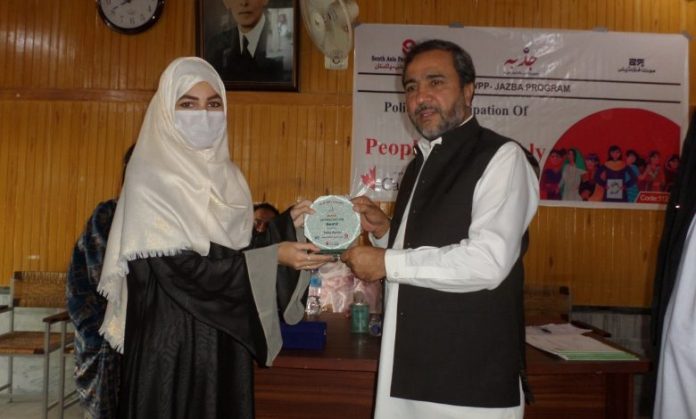 Sidra Ayan, one of the award winners told TNN that she was really happy for winning this award. “The award has encouraged me to further improve my work,”Ms Ayan said.

Ms Ayan said that she started working after receiving journalism training from TNN. “I am working with dedication,” she said.

She said that more women should join journalism. Ms Ayan said that if the women did not speak out about their issues, neither someone will listen to them nor their problems will be resolved.

“Women could not work as journalists due to social issues but attitudes are changing and females should join journalism,” she said.

Nusrat Ara, a spokesperson for the Jazba said that award for women were meant for further encourage them in their fields. She said that such awards will push them to achieve further excellence in their fields of work.

Ms Ara said that the award distribution was held in connection with local bodies’ polls. She said politics will enable women and youth to work for working to change their lives and areas.

She said that some of the women who received awards were working their NGO. Ms Ara said that Sidra Ayan and Mahnoor Shakeel were awarded for raising voice for public in a conservative area like Mardan.

She said that it was hard to work as woman journalist in Mardan and that was why both female journalists have been awarded.

“More women should join journalism to raise issues faced by females in the country,” she added.