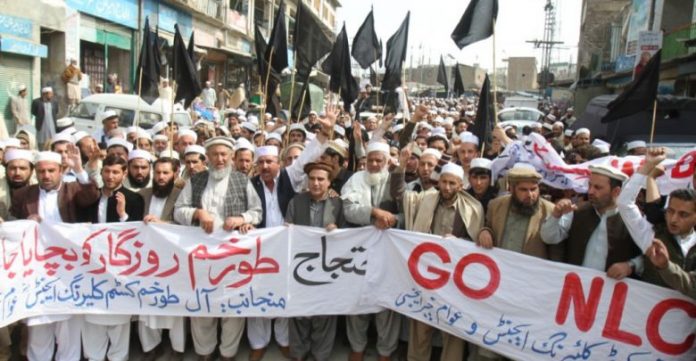 PESHAWAR: The Torkham Border customs clearing agents have ended their five days strike after successful talks with the government officials in Peshawar. The agents were on strike for the last five days asking the government to provide modern custom clearing facilities as there is not even fast internet facility available.

They said it is a big hurdle to speed up the clearing process.  Due to the protest, bilateral trade between Afghanistan and Pakistan was disrupted during the last five days and long lines vehicles with trade goods were stranded on both sides of the border.

During the talks, the officials have assured the agents that all their issues will be resolved and clearing time will be an increased from 7 am to 5 pm. The government officials also assured them that a facilitation centre will be established in the trade hall where fast internet facility will be available.

After the strike call by the Torkham border custom clearing agents, private clearing agents have also started a protest for an unspecified period of time. Zarqib Shinwari, the president of the customs clearing association said that after full scanning, 100 per cent of search of trucks, transporting trade goods, is against the law.

The Frontier Customs Agents Group Khyber Pakhtunkhwa urged the Federal government to resolve issues faced by custom clearance agents that will be helpful in boosting trade volume between Afghanistan and Pakistan.

“The trade volume between Pakistan and Afghanistan is decreasing due to a host of reasons including the closure of borders due to strikes,” said the frontier customs agents in a statement. “Hundreds of trucks loaded with fresh fruit, vegetables and other items had been stranded on both sides of the Torkham border due to the protest.” The frontier Customs agents group has asked the authorities and clearing agents should resolve the issues so that the trade activities could resume.