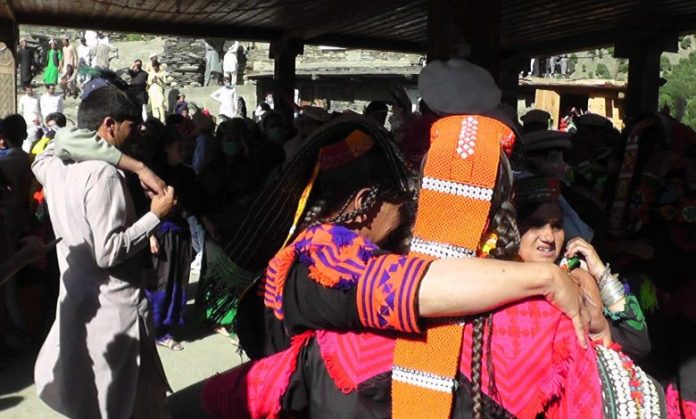 CHITRAL: The colourful Uchal festival has concluded with fanfare in Kalash valley of Chitral, but tourists are still reluctant to leave the beautiful valley.

Uchal is a thanksgiving festival which marks the season of harvesting the crops and plucking of ripe fruit from gardens. Such is the lovely weather and landscape of Kalash that the tourists, who came for enjoying the festival, are now reluctant to go back even two days after conclusion of the festival.

The roads in the valley are in dilapidated condition, but it hasn’t stopped tourists from arriving in large number. Local people believe that Kalash and Chitral may become largest tourist destinations of the country and one of the largest destinations in the region if the condition of roads is improved.

Special Assistant to Chief Minister on Minorities Affairs Wazirzada Kalash said while talking to TNN that the Khyber Pakhtunkhwa government has allocated Rs4.56 billion for improvement of roads in Chitral and work on roads will be initiated soon.

Wazirzada said the present government is paying special attention to promotion of tourism and it has allocated funds for this purpose, which shows its seriousness and sincerity. He said different projects for promotion of tourism are in process under the vision of Prime Minister Imran Khan.

Tourists who had come to enjoy Uchal festival said they enjoyed every aspect of the festival. However, they demanded improvement of condition of roads.

Members from Sikh, Hindu, Bahai and other minority communities also participated in the Uchal festival during which the Kalash people celebrate the festival during day-time in Rambor, while women present their traditional dance and sing songs. The festival continues till morning in Bamboret valley during which the men and women dance with drumbeats in their special and unique style.

A religious leader of Kalash tribe, who is called Qazi, sings songs in praise of the tribe’s elders and people around him put money into his cap, which is considered a symbol of honour.

After conclusion of the three-day festival the KP government has announced the establishment of the Kalash Development Authority for swift development of the area.