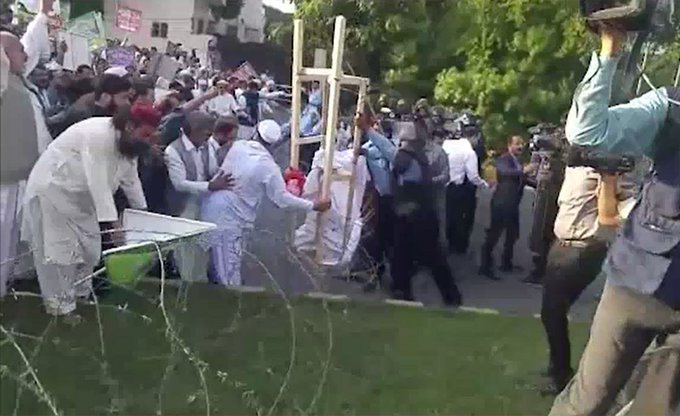 PESHAWAR: The All Pakistan Traders Association (APTA) on Wednesday marched from Rawalpindi to Islamabad against federal government’s tax reforms. A large number of businessmen and traders attended the demonstration.

As the protestors tried to enter the Red Zone to protest outside the Federal Board of Revenue office, police stopped them and upon resistance, Police restored to baton charge. In response, the protesters started pelting stones at the policemen. Police have said that a number of traders have also been arrested.

Earlier, a large number of merchants from across the country reached Serena Chowk in a rally. The protesters removed the barbed wire and all the barriers and shouted slogans against the government’s economic policies.

Meanwhile, the Federal Board of Revenue decided to hold talks with the protesters but said they were willing to listen only to the justified demands of the business community. However, the talks failed to yield any results as the FBR officials declined to revoke the order requiring traders to present a copy of their CNICs for the sale and purchase of goods.

President Sarhad Chamber of Commerce and Industry, Engr Maqsood Anwar Pervez slammed the imposition of additional taxes and increase in their ratio and demanded of the provincial government to give relief to traders affected by Peshawar Bus Rapid Transit (BRT) project.

Maqsood Anwar said that the business activities have adversely affected since the launch of the BRT project in provincial capital due to the business community has inflicted huge financial losses. He said the imposition of additional taxes on the business community was unjust and unacceptable to them. He assured that they will take the issue of the one-way road in Peshawar Saddar with relevant authorities effectively.

SCCI chief vowed they will extend services without any discrimination and to take practical steps to resolve the issues of the business community on a priority basis. He said the chamber is the prime forum, which had played an important role in the resolution of the business community. He assured that they will not allow anyone to do injustice with traders and urged the government to abstain from harassing shopkeepers and retailers which are the biggest source of employment.