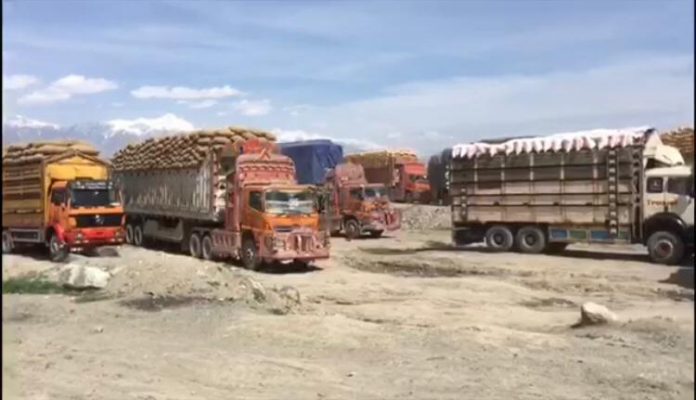 PARACHINAR: Transporters and traders blocked on Wednesday the Pak Afghan route for traffic in protest against the slow clearance process on the Kharlachi border point.

They said due to the extremely slow pace of checking hundreds of the loaded vehicles are lined up on the border waiting for clearance for several days due to which, said traders and transporters, the perishable goods such as vegetables and fruits are on the verge of decay.

After such a long delay when the consignment reaches to its owners, they usually refuse to accept it as due to the decay of the vegetables in the process. While addressing the protesters at Kharlachi border trader Wahid Hussain, transporter Laiq Hussian, Zartaj, Darya Khan, Haji Subhan Ullah and others said that they have been subjected to an unprecedented loss due to slow checking process. The protesters said that there some 600 vehicles loaded with perishable goods such as fruits and vegetables parked at the border crossing point for the last several days.

The protestors maintained that they are forced to hold a protest, as the authorities are not paying any attention to their loss. The traders and transporters expressed that it is not only their, but also the loss of the country as the import and export to Afghanistan is almost nil now.

A transporter, Alam Gul said that they are also facing the loss as their loaded vehicles are parked on the border that damages their expensive vehicles and precious time. He added that hardly a dozen of vehicles managed to cross the border on a daily bases due to the very slow pace of checking.

The protesters demanded the federal and provincial governments that they are not again the checking of their vehicles but asked to speed up the process and provide some ease to transporters and the traders. “A loaded vehicle from Afghanistan takes 6 to 7 days to cross the border into Pakistan,” said one the transporter.