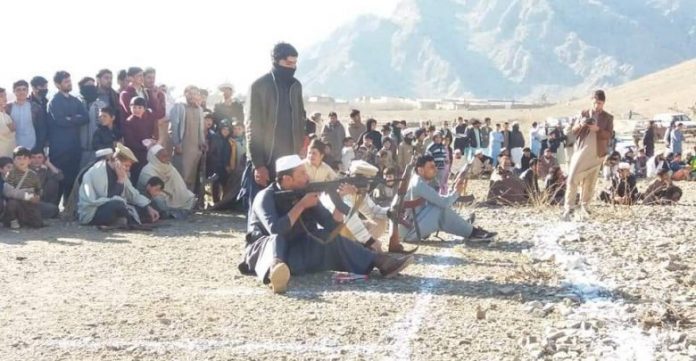 LANDI KOTAL: The Annual aiming competition, with Kalashnikovs, held here at Ganj ground in Tehsil Landi Kotal that attracted hundreds of spectators from across the Khyber tribal district.

The arrangements for the traditional competition were made by the Khyber Sultan Ganj committee at Sultan Khel village in which 30 shooters from different parts the district participated.

Aiming is an ancient traditional sport in tribal districts. In the past, the tribal people used to ask a bridegroom to aim a target with a gun before taking bride home.

A number of tribal elders including Malik Irshad, Akhtar Nawaz, Mushtaq, and Shan Afzal among others were present on this occasion in the ground. They appreciated the youth for having a keen interest in following the centuries-old customs and traditions of tribal society.

The tribal elders said that the purpose behind the event is to provide a source of entertainment to tribal youth. Its purpose is also to show the world that now peace has been restored in the region, as sports and cultural activities are considered as signs of peace in the tribal belt.

The organizers of the event also highlighted that there is a lot of sports talent in the tribal area of the country, but unfortunately, efforts have never been made to explore it.  And the reasons behind it, said the organizers, are not only the volatile law and order situation but also the apathy of the federal government towards the tribal region.

While talking to media persons, the participants of the competition said that a peaceful environment is a prerequisite for a successful arrangement of all the sports and cultural events. In the past due to insecurity, added the players, a number of sporting events and cultural traditions have badly affected.

The youth also appreciated the efforts of security forces for efforts for the restoration of peace due to which they are now gathered without any fear. They expressed a determination to stand shoulder to shoulder with Pakistan Army for durable peace and positive change in the tribal districts.