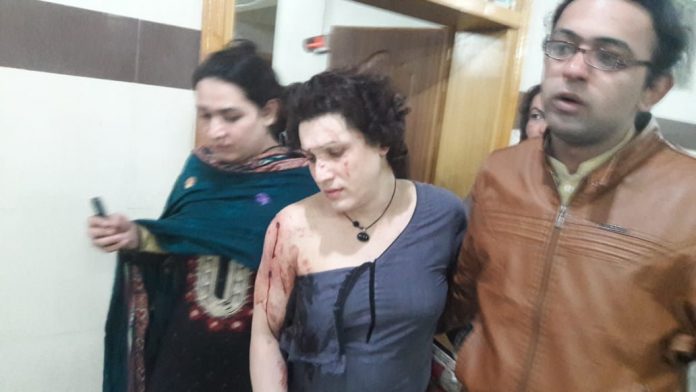 PESHAWAR: A transgender person was shot injured outside Laghari Plaza in Dera Ismail Khan on Saturday after she refused to participate in a musical program.

The transgender, Known as Payal, was rushed to the district headquarter hospital where her condition is stated to be out of danger.

According to the police sources the transgender, Payal, was fired upon after she refused to participate in a musical program.

In her statement to the Police, Payal said that Lal Hussain arrived at her residence insisting her to perform in his music program, but she refused. Due to which, alleged Payal, he opened firing after they exchanged in a verbal joust. Lal escaped the spot after committing the crime.

Police officials stated an FIR has been registered against Lal Hussain and further investigation into the case is underway.

According to the 2017 census, there are more than 10,400 people who are transgender in Pakistan — a number which campaigners contest and said that there were around 45,000 transgender people in Khyber Pakhtunkhwa alone.

Pakistan’s Transgender Association (PTA) estimates that as many as 62 transgender people have been killed since 2015 in Khyber Pakhtunkhwa.

However, the right activists believe that so far no solid steps were taken for their protection.

Rights activist Taimur Kamal, who is struggling for the rights of the transgender persons in the province said that it was unfortunate that violence against the members of the transgender community was still continuing. “In our society, there is no place for the third gender, they are constantly targeted without inviting much attention,” he said.