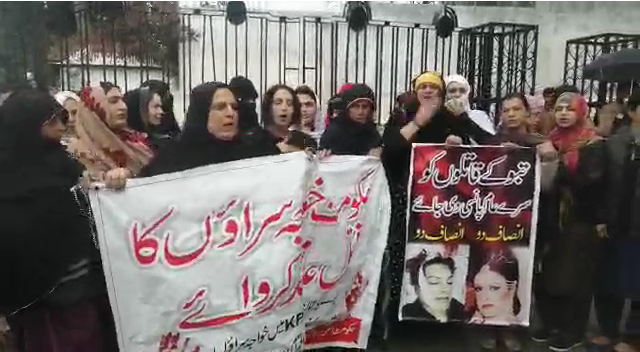 KARAK: People from transgender community of Mansehra on Thursday staged a protest demonstration against the murder of a transgender person by unknown attackers in Karak.

The Shemail Association members led by Nadira Khan and Maria Khan staged protest in front of Mansehra Press Club amid rain and cold weather. Nadira Khan said the transgender community is under attack and several persons from the community have been killed recently, but the government and human rights organisations are not coming forward for their protection.

“Are we not human beings or these (human rights) organisations are working for minting funds only,” she questioned.

The transgender persons also held a rally from the press club building to Khatm-e-Nabuwwat Chowk and chanted slogans in favour of their demands.

Police said they have arrested a suspect, Hamdan, allegedly having a role in the murder. They said the music programme on that night was held in the hujra (male guest house) of Hamdan after which the transgender persons were attacked.

Recently, a transgender person, Nazo was also killed in Peshawar and the culprits had cut her into pieces.