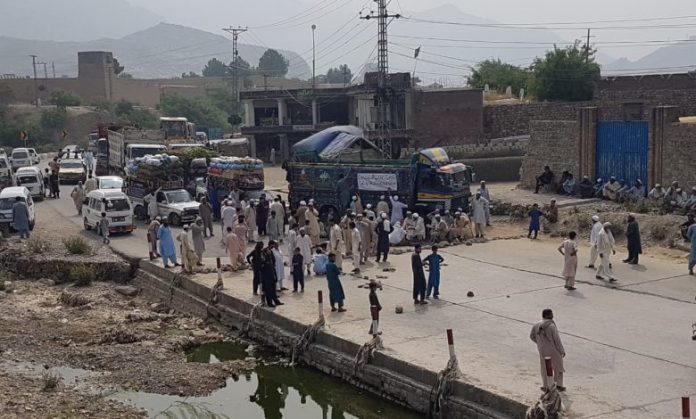 LANDIKOTAL: The transporters in Sultankhel area of Landikotal tehsil in Khyber tribal district on Monday blocked the Pak-Afghan Highway to record their protest.

The transporters have alleged that an illegal transit terminal has been set up near Bara Bazaar to receive extortion from transporters. They alleged that the truck drivers paying Rs50,000 extortion are immediately allowed to cross the Torkham border, while those refusing to pay extortion are made to wait for two months in the name of different procedures.

The protesting transporters demanded the government to take notice of the matter and end the practice of ‘extortion’ at Bara Bazaar terminal and also the Customs officials must decide about its legal status. They said their protest will continue till elimination of the ‘illegal’ transport terminal.

The people using the road faced a lot of difficulties due to its blockage in hot weather.

The protest by transporters in Landikotal came few days after the traders and social circles of South Waziristan expressed reservations over the mode of trade operations at Angoor Adda border crossing.

The representatives of flour dealers said the Ahmedzai Wazir tribe was promised that the Angoor Adda border will be reopened on the pattern of Pak-Afghan borders in Torkham, Chaman and Ghulam Khan. However, they alleged that the border gate has been opened for illegal goods. They alleged that the illegal transportation of timber, coal etc is continuing on the border gate which is extremely dangerous for the area. They said that rice, which is a major Pakistani export item, is not being allowed through Angoor Adda gate.

On July 16, the district administration and police came face to face over running the affairs of Angoor Adda check post.

However, sources said, all the issue is about money as Angoor Adda check post is considered a very ‘profitable place’.