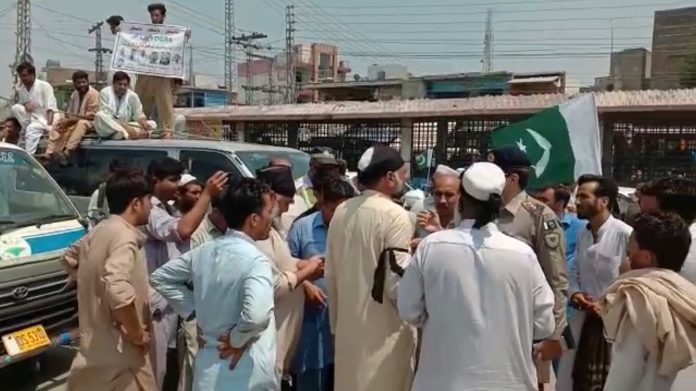 NOWSHERA: Public transporters on Monday observed strike against the ban on CNG and LPG kits in passengers and schools vehicles. They blocked GT road at Shobra Chowk and chanted slogans against federal government and Oil and Gas Regulatory Authority.

The striking transporters termed the notification ‘injustice’ with the transporters and public and said that not only transporters will face loss but also public will have to bear the extra burden as the petrol prices are also skyrocketing in the country.

The president of transporters association said that OGRA has earlier collected millions from transporters in term of CNG cylinders fitness test fee. He said that it is injustice with the transporters to now remove the expensive CNG kits from vehicles.

Another protest was held in Jahangira of district Nowshera where the road was blocked at Kherabad area, creating transportation problems in the whole district. Traders said that they will have to face loss in millions if they removed cylinders from the vehicles. They warned that their protests will continue until the government takes the decision back.

In order to ensure the safety of passengers, save precious lives and to avoid unpleasant incidents, OGRA has advised a complete ban on the use of CNG/LGP as fuel and installation of gas cylinders in all public service vehicles (PSVs). OGRA has further requested all the concerned authorities including NHMP to ensure removal of CNG/LPG cylinders from inside of all PSVs plying on within and intercity road along with the cancellation of route permits if found in violation.

Furthermore, School Vans which are private vehicles, in no case be allowed using CNG as fuel and cylinders installed therein to ensure the safety of innocent children.

The OGRA notification further directed that specially designed banners may be displayed at prominent places like toll plazas and transport addas etc regarding the implementation of above directions of the competent authority.  OGRA has also directed that transporters may also be informed through briefings/meetings as well as print and electronic media and subsequently a rigorous special drive be launched against the use of CNG/LPG as fuel and installation of cylinders in PSVs and School Vans.