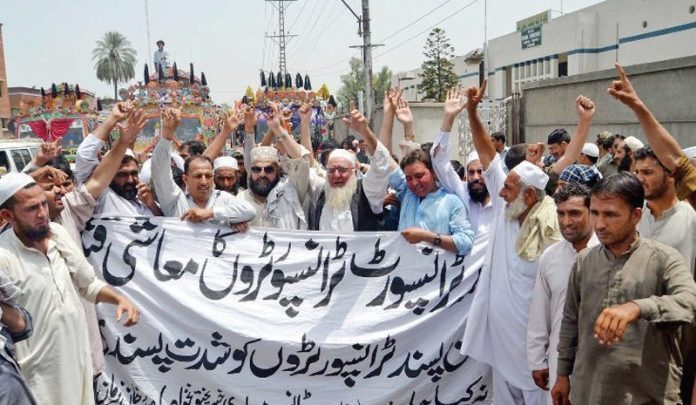 PESHAWAR: The transporters on Monday staged a protest against a 31 percent increase in gas tariff and asked the government to withdraw price hike to give relief to the common man.

The transporters gathered on Charsadda road where they blocked the road for all type of traffic and chanted slogans against the Pakistan Tehrik-e-Insaf (PTI) provincial and federal government.

In a statement, the All Pakistan CNG Association also rejected and asked the government to resolve the issue through consultations with the association and other stakeholders. The protesters have blocked the road for a long time, creating problems for the commuters.

The protesters asked the government to withdraw the recent increase in CNP prices otherwise, they will be forced to increase fare which will put more burden on the masses in the province. They alleged that there has been a continues increase in petrol and gas prices, while return the government is not providing any facilities.

The transporters said that the common man of the country is now no more in a position to afford such a huge and sudden increase and looking towards the government for relief.

In a statement, its central leader Ghiyas Abdullah Paracha said here on Sunday that the government’s decision was not acceptable. “It will reduce the demand for gas, increase demand for petrol and add to the oil import bill as well as environmental pollution,” said the statement issued by CNG association.

The 31 per cent hike in gas tariff would translate into an increase of about Rs22 in the price of CNG in Sindh, Khyber Pakhtunkhwa and Balochistan provinces. Punjab would remain immune from it as CNG stations in that province are using imported RLNG.

It is the highest hike during the last decade as the price of natural gas for CNG sector had been increased from Rs980 per mmbtu to Rs1,283 per mmbtu. The formula for sales tax had also been changed which would increase the cost of fuel from Rs2.25 to Rs2.74 in different provinces.