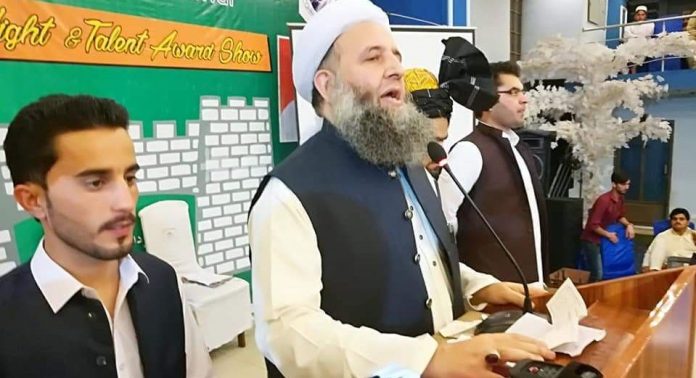 PESHAWAR: Federal Minister for Religious Affairs Allama Noorul Haq Qadri has said that the people of the tribal areas are being dragged into another war in the name of nationalism.

Addressing the cultural night function organised by Khyber Students Association on Saturday night, Noorul Haq Qadri said the people of the tribal areas have suffered a lot recently and now they are being pushed into another troublesome situation in the name of Pakhtunism and nationalism.

The minister said Ameer Abdur Rehman and Amanullah Khan played great role for the Pakhtuns and due to their efforts Pakhtuns are now living with honour and dignity. He said it is a great opportunity to get maximum rights and privileges for Pakhtuns as important ministries as held by the Pakhtun ministers in the sitting government of the Pakistan Tehreek-e-Insaf (PTI) in the Centre.

Noorul Haq Qadri said he will always make demands for Pakhtuns rights and with fight for it under the Constitution of Pakistan, but he can never imagine betraying the country. He said Pakistan was achieved under the Islamic Ideology and the country will be there till the end of times. He said India cannot cast an evil eye on Pakistan.

The minister mentioned that a survey has been completed in the merged districts for restoration of educational institutions which were damaged during militancy and military operations. He said the Khyber Economic Corridor has been made part of the mega project of China Pakistan Economic Corridor (CPEC) and this process will cost one billion dollars.

Noorul Haq Qadri also emphasised the need for improving bilateral trade with Afghanistan through Torkham border. He said the government is working on keeping Torkham border open round the clock and relaxing the visa policy.

He again made it clear that he can sacrifice everything, but will never allow anyone to disturb peaceful environment of the region.