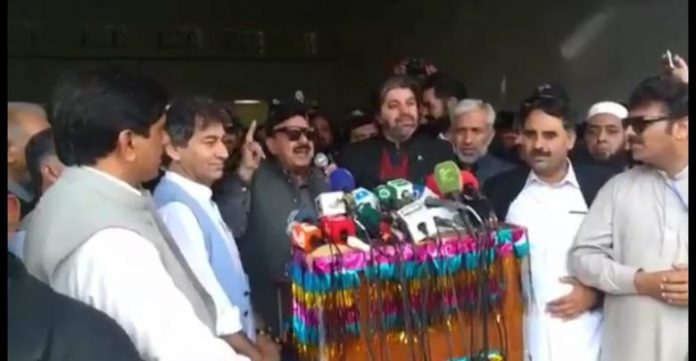 MARDAN: Minister for Railways Sheikh Rashid Ahmed said on Sunday that the tribal districts will be connected to the rest of the country through railway tracks.

Addressing a press conference during his visit to Mardan Railway Station, Sheikh Rashid said the government is working on laying 1,700 kilometres new railway tracks across the country. He said Mardan-Dargai service has also been restored after 17 years. He said a train from Dargai to Karachi will also be run and fruit trees will be planted on both sides of the track.

The minister said he has a special connection with Mardan and have several friendships. “Usually, Pakhtuns have more children, that is why the 100-seat Rehman Baba Express is currently used by 160 passengers,” he said, adding that the critics initially made fun of Rehman Baba train, but it proved successful in the end.

Sheikh Rashid said various projects related to Railways will be completed under China Pakistan Economic Corridor (CPEC) and agreements in this regard will be finalised with China soon. He said the railway tracks will serve as a backbone of the CPEC project. He said train is a respectable mode of travelling especially for the families.

The minister said the Pakistan Railways has set target to earn Rs10 billion revenue annually out of which Rs4 billion has already been earned. Referring to a ML-1 track, he said on construction of the track, it will provide employment opportunities up to 90,000 people. He said the Railways Ministry has so far advertised 10,000 jobs and a million people have applied for these jobs.

Sheikh Rashid said encroachments on Railways’ land will be removed at all costs. He said the provincial government should expedite work on removal of encroachments so that Mardan to Nowshera track and other tracks could be restored expeditiously. He said all the British-era tracks will also be restored.

The minister said additional six new trains, three each in Sindh and KP, will be run soon. He said the oil-run trains will be removed gradually as these trains create pollution.