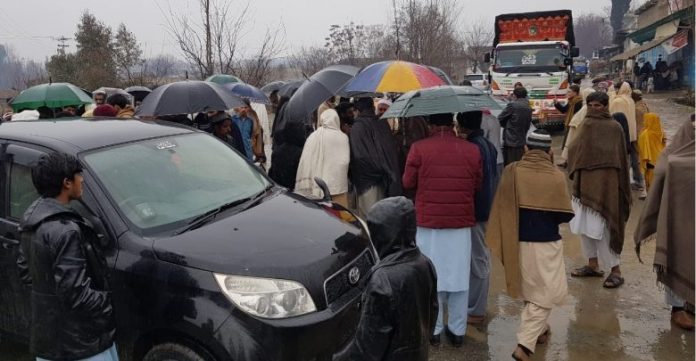 KHAR: Bajaur Police took prompt action and recovered a kidnapped tribal elder within few hours of the abduction on Sunday.

Unknown miscreants kidnapped tribal elder Noorul Islam on gun point from Haji Long area of Khar tehsil in Bajaur in the morning. The people of the area staged a protest demonstration and blocked Peshawar-Bajaur Road for all kinds to traffic.

Bajaur Police came into action after the protest. On directions of District Police Officer (DPO) Pir Shahab Ali Shah, police teams led by Deputy Superintendent of Police (DSP) Gulzar Khan cordoned off different roads and started checking every vehicle. The kidnappers were stranded in Bajaur as the police had barricaded all the roads and they escaped while leaving behind their vehicle in which the kidnapped tribal elder was being taken away. Police recovered the vehicle and the kidnapped tribal elder.

Local sources said the kidnappers also tortured Noorul Islam probably due to his resistance due to which he sustained injuries. He was recovered in injured condition and shifted to District Headquarters Hospital for treatment.

People of the area expressed satisfaction over the performance of police. They said the police by taking timely action foiled the plans of kidnappers. They said crimes, particularly kidnappings, can be controlled to a great extent if police continues to act promptly against criminals. They assured full cooperation to police in eliminating the crimes from the area.

The Bajaur incident happened three days after a student was recovered five months after his kidnapping in Bannu, while another student was kidnapped from Lakki Marwat the same day.

In Bannu, the medical student Afrasiab was recovered with the efforts of police and a Jirga of local elders. DPO Yasir Afridi on Thursday handed over Afrasiab to his parents in presence of the Jirga elders.