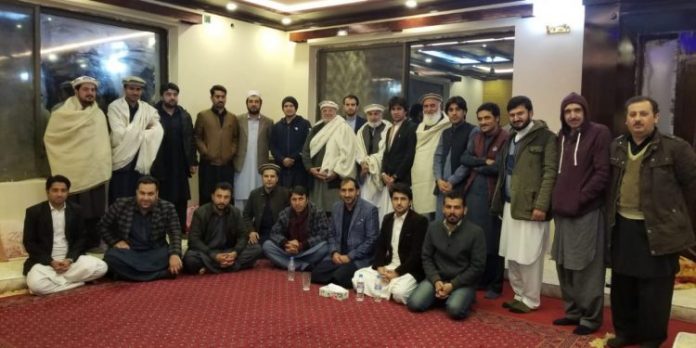 PESHAWAR: The anti-merger tribal elders have decided to support the Tribal Youth Jirga on the demand of Rs100 billion development budget for the tribal districts and other such issues which can benefit the local population.

The tribal elders made this decision after a meeting with the representatives of the Tribal Youth Jirga in Peshawar on Saturday. The meeting discussed the emerging situation after the merger of the tribal districts with Khyber Pakhtunkhwa. Anti-merger elders Malik Khan Marjan Wazir, Malik Waris Khan Afridi and Malik Abdur Razzaq Afridi attended the meeting, while the Youth Jirga delegation was led by Jamaat-e-Islami (JI) Youth Wing KP vice president Shahjehan Afridi.

Sources said the meeting discussed the issues pertaining to population census, declaration of tax-free zone for 10 years, local bodies system, minerals and police and Levies in the tribal districts. The participants expressed reservations over the census results and local bodies system and said Levies must be given preference over police keeping in view their countless sacrifices for peace in the region. The sources said the meeting emphasised the need for strengthening of the Jirga system, establishment of a separate Public Service Commission in the tribal districts for 10 years, representation of the local people in the reforms committee, retaining the status of the Fata Secretariat and existing National Assembly seats in tribal districts, quota for tribal districts in the Prime Minister’s Housing Scheme, doubling the tribal quota in admissions and jobs, security for tribal traders, arms licences, share of the tribal districts in China Pakistan Economic Corridor (CPEC), health cards on equality basis and establishment of universities and cadet colleges in the tribal areas.

The Jirga members thanked Malik Khan Marjan for his cooperation with the Jirga in great interest of development and betterment of the tribal districts. He said despite his personal reservations, Malik Khan Marjan decided to cooperate with the Jirga in collective interest of the people, which is appreciable. The Youth Jirga vowed to fully incorporate the suggestions of the tribal elders in the reforms process. The Jirga members said such steps would be discouraged which will impede the reforms process.