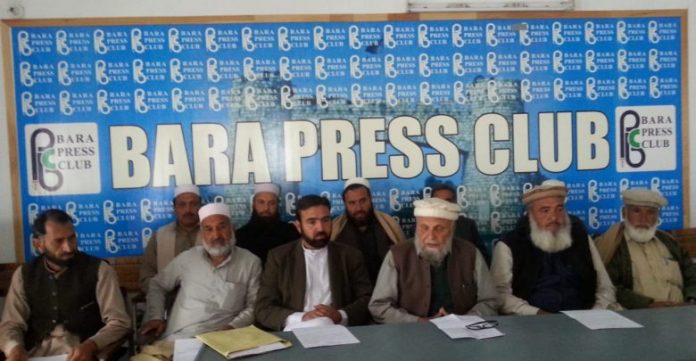 BARA: The tribal elders on Wednesday asked the Khyber Pakhtunkhwa (KP) government to take the people of Bar Qamabar Khel area in confidence before starting work on the public park, a hotel and other tourists facilities on the hilltop at Basey Baba area in Khyber District.

The tribal elders were gathered at a press conference here at Bara Press club where they also asked the government to ensure basic facilities to the people of tribal areas without any further delay.

“The tribal elders should be taken into confidence before the start of work on the public Park and other facilities in their area,” said tribal elder Abdul Jabbar Khan. He was flanked by Muhammad Rehan, Abdul Haseeb and other elders. They maintained that tribal people have first right over the resources of their area and they will never allow its exploitation until the local people get full benefits.

The elders also demanded that they should be given assurance that the jobs opportunities created due to the construction of the park, will only be given to the youth of the area and all the employees of the park will be hired from the local population. “The public park will benefit only the affluent people. The poor people should have the right to be employed in the park,” the elders said.

The tribal elders also demanded the government that though much announcements have been made but so far, no practical steps are taken to ensure the basic facilities, including education and healthcare to the tribal people who were kept deprived of their basic rights for generations.

It is pertinent to mention that during the ongoing month, Governor Shah Farman, Minister for Tourism, Sports, Culture, Youth affair and Archaeology, Muhammad Atif Khan, Corps commander Peshawar other security officials visited the Hilltop at Basey Baba area in Bara and announced the construction of a public park, a hotel and other tourists facilities.