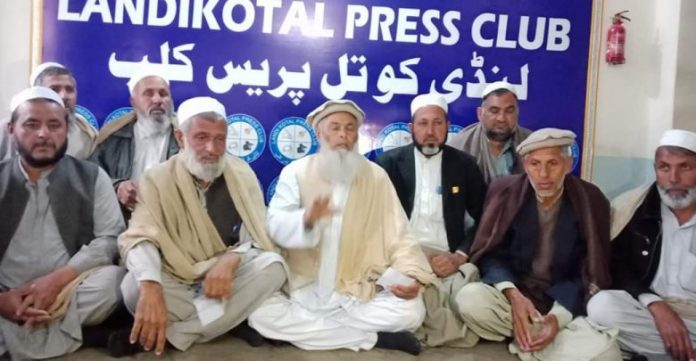 LANDI KOTAL: The tribal elders on Monday asked the government to open the Loye Shalman to Warsak road for all sorts of traffic to provide them easy access to the provincial capital. The elders, including Subedar Malik Haji Abdul Jalal along with other notables from the Loye Shalman were addressing a press conference in Landi Kotal press club.

The tribal elders said that the distance from Shalman to Warsak in Peshawar is just 20 kilometre, however, due to the closure of the road, they have to travel for almost 100 km to reach Peshawar via Landi Kotal, which is an injustice with the tribal people. The elders maintained that there is no doctor, no schools or college, and for every such facility, they are depended on Peshawar. They said that due to the closure of the road, they are faced with numerous issues, including the children education, which is their basic right.

They said that there is in no basic facilities of life available in Shalman and the people have to rush to patients to the provincial capital, so it is now important that the road should be opened.

The elders said that most the people living in the Shalman are retired from Khasadar and FC forces who have served the country throughout their lives. So, they should be given some relief which they deserve. The elders also lamented that they have kept deprived of all their rights of life since the creation of Pakistan and now that the areas have been merged with the province and government is making tall claims of its development, the road should be opened.

They also requested the Khyber Pakhtunkhwa governor Shah Farman, and Chief Minister Mehmood Khan to open the Shalman to Warsak road, like the Torkham road. The tribal elders warned that if their demand was not fulfilled, they will be compelled to launch a protest demonstration against the federal and provincial government.