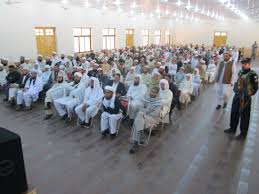 GHALLANAI, 16 August: The elders of Musakhel tribe in Mohmand Agency have called upon the government to make arrangements for the return of displaced people who are currently residing in Peshawar and different cities of Punjab.

A delegation of elders from Suran, Meti and Sari Khwah areas called on Assistant Political Agent Pir Abdullah Shah in this regard on Monday. The elders said about 2,000 families from these areas situated near the Afghan border migrated to other areas due to law and order issues in 2007-08. They said the government should also reconstruct roads, hospitals and schools in the area.

“Everyone is getting aid but our area remains deprived. We demand the government to take its time in making detailed survey of damages in our areas and compensate the people,” Malik Safdar, a tribal elder, told TNN.

The assistant political agent said the governor has approved a grant of Rs300 million for rehabilitation of areas situated near the Pak-Afghan border. He said and damaged schools, roads and health centres will be reconstructed and every assistance will be extended for return of the displaced people.

The people of these areas are still unregistered and they haven’t received any government assistance so far.