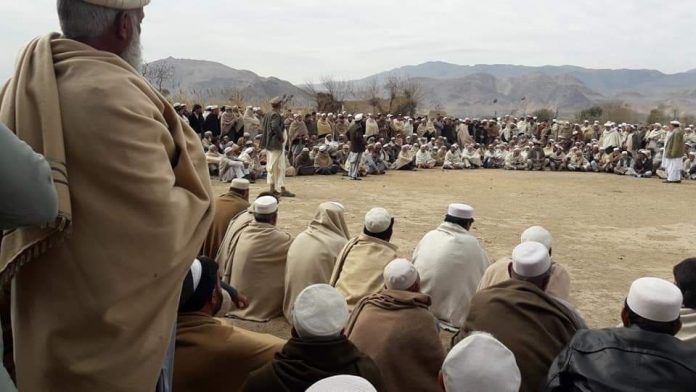 PESHAWAR: Though the draconian law of FCR has been abolished from tribal districts but the tribal traditions still prevail. Thus, as a part of tribal justice system, a Jirga in Jamrud ordered to demolish the houses of tribesmen for allegedly killing two men.

The jirga also imposed Rs1 million fine on both the men and were also directed to present five sheep to the victim families in accordance with the tribal customs. The jirga held at Ghundi Spelona Kas area in Jamrud in an open ground where a huge number of tribal people gathered to witness the jirga proceedings.

The elders of Koki Khel tribe presided over the jirga which was comprised of Naseer Ahmad Koki Khel and Malik Faiz Ullah Jan Koki Khel, Yousaf Mandokhel, Malik Naveed and Malik Zahir. Family members of both sides were also present on this occasion.

Both the accused were from the Abdal tribe who were accused to have opened firing during a jirga in Malak Shaga area of Jamrud and killing of two tribal elders, Qasam Gul and Gul Jamal.

The Koki Khel grand jirga took the matter in their hands with the aims to stop further bloodshed. They have managed to resolve the issue according to tribal traditions within a short time by imposing fine of Rs 1 million on the accused and ordered to demolish their houses.

The elders said that since both the persons violated the tribal traditions of opening firing during the Jirga, therefore, the jirga has recommended imposing a heavy fine on them. Both the tribes agreed to pay the fine and assured the jirga that they would not fight again.

While talking to media the elders of Koki Khel Tribal jirga claimed that it is Grand National jirga of the tribal people that work for peace and resolution of even grave matters like murder in an amicable manner. The elders said that the jirga also resolves the civil disputes in the absence of regular courts.