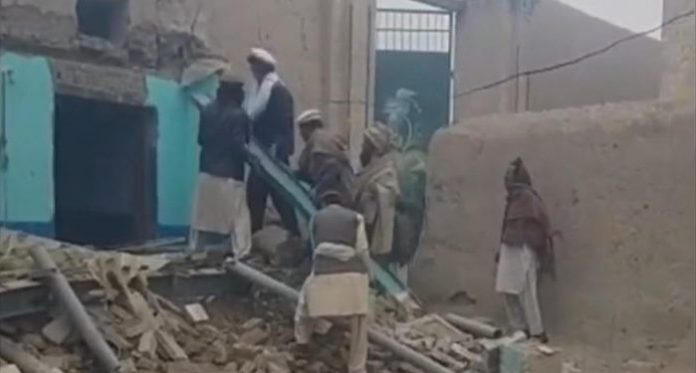 WANA: A local tribal Lashkar (militia) has demolished the houses of senior journalist Hafeezullah Wazir and set them on fire in South Waziristan tribal district.

Hafeezullah Wazir said while talking to media persons that the tribal Lashkar escaped from the Grand Jirga of 60,000 members and set fire to his three houses.

North Waziristan Union of Journalists has expressed serious concern over demolishing of the house of senior journalist. It said the incident was very cruel and illegal which has left the journalist community insecure.

The journalist body said the houses of the senior journalist were set on fire in presence of the administration officials which is a matter of grave concern. It said demolishing the houses of Hafeezullah Wazir was unconstitutional act, and demanded Khyber Pakhtunkhwa Chief Minister Mehmood Khan to take notice of the matter.

The union of journalists said cases should be registered against the people who set fire to the houses of journalist, and the administration officials who were present during this episode must also be included in the case.

The protest camp by Khassadar personnel in favour of their demands continued for seventh consecutive day at the Bab-e-Khyber in Khyber tribal district on Monday.

Malik Pervaiz Afridi, chairman of the relatives of Shohada, said the families of martyred soldiers will stage a sit-in at the Bab-e-Khyber today (Tuesday) against this act.

The protesting Khassadars said Kokikhel tribe will boycott the upcoming provincial and local bodies polls in the tribal districts if their demands were not accepted.