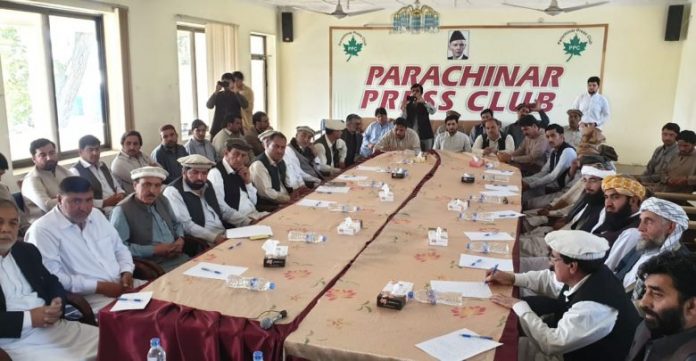 PARACHINAR: The political and religious leaders and members of the Parliament from Kurram tribal district believe that after merger of the tribal districts with Khyber Pakhtunkhwa and introduction of 10-year development programme, the merged areas will make swift development.

They said it at a seminar on overall situation, expectations, apprehensions and opportunities linked with the merger of erstwhile Fata with KP at Parachinar Press Club on Tuesday.

Speakers at the seminar urged the need for holding of local government elections in the tribal districts without delay. They said the sense of deprivation of the tribal people can be addressed by making them part of the political process. They said people can only participate in development process when the powers are transferred to grass roots level.

Member National Assembly Sajid Hussain Turi said the tribal districts will soon get their 3 percent share in the National Finance Commission (NFC) Award after which the merged districts will make swift development. He said the Pak-Afghan border at Borki and Kharlachi must be opened for trade activities which will create job opportunities.

The speakers said peace has been restored in the merged districts after great sacrifices by the security forces and local people. They said the government should take concrete steps for rehabilitation of all the displaced persons. They said the people who suffered losses must be compensated without delay. They said job opportunities must be provided to the tribal youth to keep them away from negative activities and enable them to contribute to the national development. They urged the need for quality education institutions in the merged districts to achieve this target.

The elders were of the view the government must pay attention to the potential tourist resorts in the merged districts. They said the government must invest in tourism sector in tribal districts as these areas have great potent ion to earn massive revenue and create employment opportunities. They said Shalozan, Zeran and Mekay areas in Kurram have the potential to become attractive tourist destinations.

Lawyers, traders and students also attended the seminar. They said the seminar was useful in understanding the issues of the tribal districts.