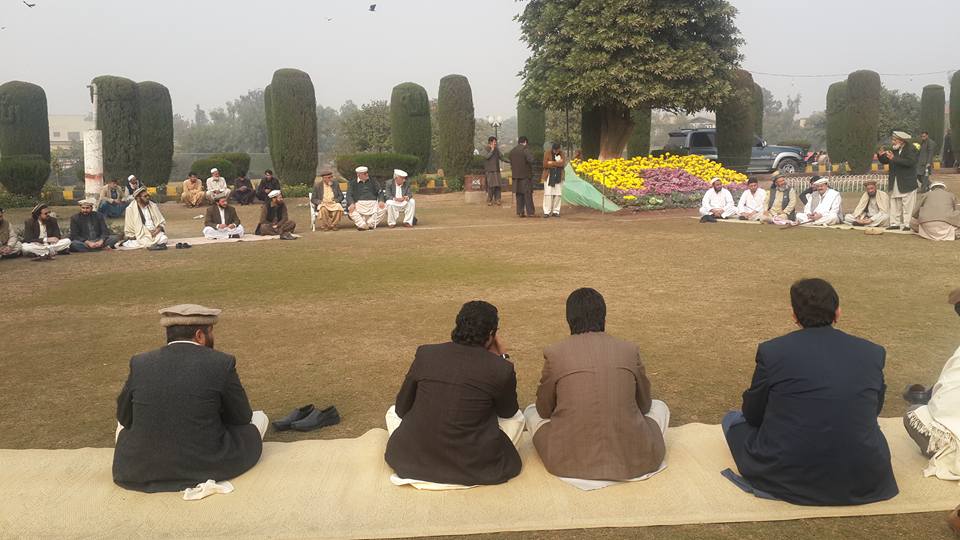 PESHAWAR, 11 December: Rejecting the recommendations of the Sartaj Aziz-led reforms committee, the traditional maliks and tribal elders on Sunday once again vowed to resist the merger of Fata in Khyber Pakhtunkhwa.

A grand jirga of tribal elders and maliks from all the agencies was held at Bagh-e-Naran here. Speaking on the occasion, the elders rejected the impression that majority of the tribal people were in favor of Fata’s merger in Khyber Pakhtunkhwa.

“In order to get the actual opinion of the people, the government should hold referendum in Fata,” suggested Malik Khan Marjan, one of the strong supporters of the status quo.

“The reforms committee led by Advisor to the Prime Minister on Foreign Affairs Sartaj Aziz lied that 99 percent of people are in favor of Fata’s merger in KP. The committee deliberately did this for their vested interest,” he remarked.

“Those who are opposing Fata’s merger in KP have been dubbed as traitors by the committee in its report,” he noted and said they would never let the government implement a controversial set of reforms in Fata.

“It is beyond understanding as they said that after Fata is merged in Khyber Pakhtunkhwa, its problems would be resolved. Fata’s merger with KP will further aggravate our problems as the province is already devastated by militancy and terrorism, he said.

”The government is planning about our future without consulting us. We want to preserve our own culture and status. Instead of merging Fata in KP, the government should constitute Fata Council comprising about 60 to 70 notables and the council should be authorized to decide about the fate of the Fata whether it should be merged in KP or given a distinct status,” the tribal elder remarked.

He informed that a grand jirga will be organized on Dec 18 in Shahi Bagh, Peshawar about proposed Fata reforms in which JUIF leader Maulana Fazal ur Rahman and Mahmood Khan Achakzai would also be invited.