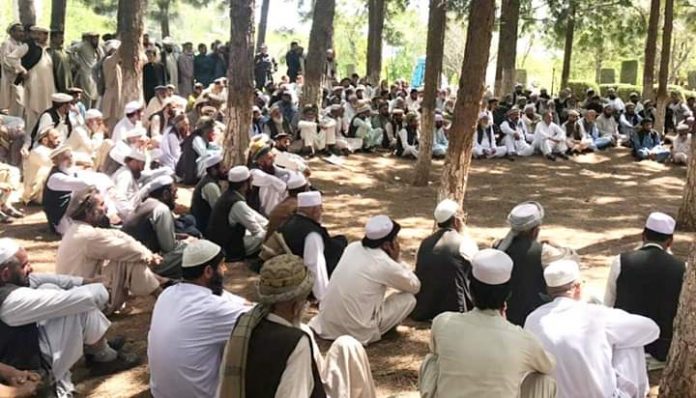 Addressing a gathering of tribal elders and youth, Hameedullah Jan Afridi said the people of the tribal areas have rejected the ‘forced merger’ with Khyber Pakhtunkhwa and his party has initiated a movement against it. He said the movement has been initiated in all the tribal districts and frontier regions (FR).

The former minister thanked the people of Orakzai for inviting him and he assured them that a huge public gathering ‘Raddul Inzaman’ against the merger will be held in Orakzai tribal district soon. He criticised the federal and KP government for what he said offering nothing for the people of the tribal districts in the merger plan. He said the only thing that the government is promising to give to the tribal people is the 3G and 4G internet service, while the rest of the world is already utilising 5G and 6G. He said the government has done nothing in the tribal districts except raising hollow slogans.

Mr Afridi said if the government is really serious in giving something to the tribal people then it must build colleges, universities, schools, roads and hospitals. He said the tribal districts must be given greater share in the China Pakistan Economic Corridor (CPEC) as this region was affected the most from militancy and military operations. He said the owners of damaged houses must be given compensation and the families of the martyrs and injured in the war against terrorism must also be compensated.

The Qabail Movement chief said Punjab, where the Pakistan Tehreek-e-Insaf (PTI) is in power, has also refused to give 3 percent share to the tribal districts in the National Finance Commission (NFC) Award which is a matter of grave concern. He invited the tribal youth and elders to join his movement and said all the apprehensions which he showed before the merger process are proving real now. He claimed that his movement is joined by people in large number and soon the anti-merger campaign will meet success.