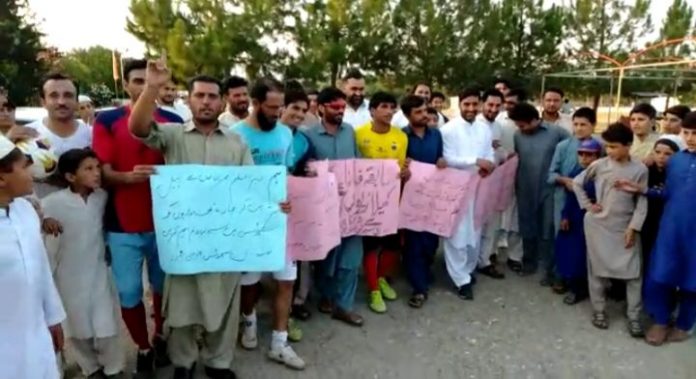 BAJAUR: Local sportsmen under the shadow of all sports association organized a protest against the elimination of special sports quota for tribal districts outside Bajaur sports complex.

The demonstration took place on Sunday in which members of Association and athletes participated. They were carrying placards in their hands and shouted slogans against the provincial government for ‘violations of their rights’.

The protestors said that the KP government should give more opportunities to players of the Newly Merged Districts (NMDs) instead of snatching the existing one. Speaking at the protest, Waheed Gul, Habibullah, Attaur Rahman Mughal and Hussein Ahmad said that before the integration of the tribal district with the province, the tribal area was entitled to a quota of a total 300 players in national games, but now the government is breaking its promise.

Speakers said the government had promised the tribal people that the quota would be retained even after the merger of the tribal districts with the province. But regrettably, said sportsmen, the former FATA Olympics have been abolished and even in national games, tribal players are not entitled to any quota.

Participation said there are no proper sports facilities in tribal areas which are available in other cities and areas of the country that is why they would not able to compete with the players of other parts of the country. Demonstrators have demanded that the government should keep its promise to retain the former quota for tribal districts for five years.

The KP government is claiming that the present government is focused on providing sports facilities in the tribal area and a total of 1000 grounds would be constructed. Sports minister Muhammad Atif Khan has said that under-23 games in tribal districts will start from next year in newly merged districts to provide them with more facilities and opportunities to nourish and explore new talent.