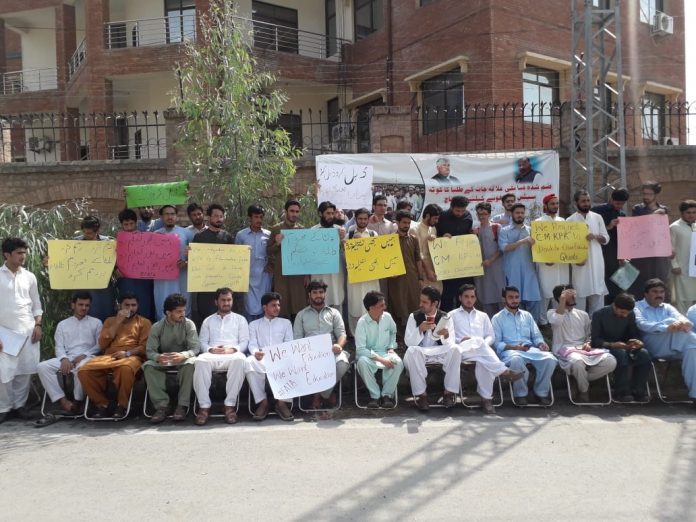 Khan Zaman Orakzai, president of the Tribal Youth Movement (TYM) said the Prime Minister Imran Khan has issued directives several months ago to Chief Minister Khyber Pakhtunkhwa to double quota seats in medical and engineering colleges. But no steps have been taken yet.

Khan Zaman said that there are only 18 medical seats at each district level which are not enough for such a huge population. Zaman added students in the tribal districts cannot enrol in the open system due to lack of financial resources causing hundreds of tribal students to lose admissions despite passing the ETA test every year.

The Khyber Pakhtunkhwa Chief Minister Mehmood Khan was demanded that the future of tribal students should be protected and double quota seats in medical and engineering colleges. If KP government failed to meet the demand, a protest will be held in front of the Chief Minister’s House, the protesters warned.

Bilawal Afridi, a newly elected member of the Khyber district, also reached the protest and in his address to the protesters, he said the tribal districts are already suffering from backwardness. “And getting an education is an important need of the hour,” said Bilawal Afridi. “Now tribal people have got the right to set in the provincial assembly and he will stand with the youth of Tribal districts on every front to secure their rights.”

The MPA assured the students that he will raise voice to double seats in engineering and medical colleges on the floor of Khyber-Pakhtunkhwa assembly.

He assured the students that he would discuss the issue with Chief Minister Mehmood Khan and would try to resolve the issue. “It is injustice with the students and all efforts will be made to provide them with more chances to study,” Bilawal told the protestors.

Bilawal maintained that it is the responsibility of the government to ensure that all students have equal access to get an education. The MPA said that they will no more allow violations of their rights and will make solid efforts for student’s rights.