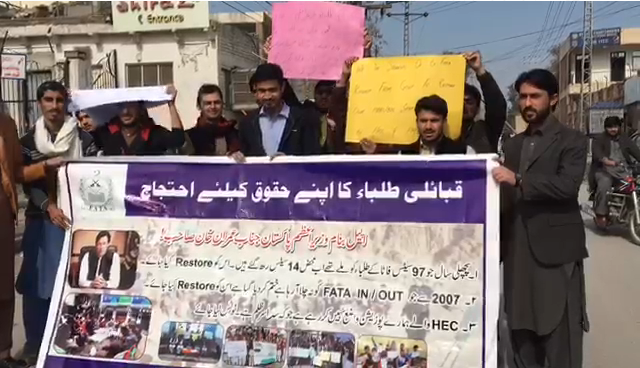 PESHAWAR: The students of the merged tribal districts have said the Pakistan Tehreek-e-Insaf (PTI) government has reduced their seats in the medical and dental colleges which is unjust.

Talking to TNN after a press conference at Peshawar Press Club on Monday, Shakoor Ahmed, a student from Bajaur tribal district, said there were 192 seats for the students of the tribal districts and Balochistan in the medical and dental colleges of the country before the merger of erstwhile Fata with Khyber Pakhtunkhwa. He said the PTI government has reduced that seats to 29 only and 15 among these seats belong to Balochistan which is a huge disappointment for the tribal students.

During the press conference, the tribal students called upon Prime Minister Imran Khan to restore the seats of the students of the tribal districts in the medical and dental colleges. They said they will take the matter to the High Court if their demand was not accepted. They also threatened to stage protest outside the Banigala residence of the prime minister if the issue remained unresolved. They said the protest will continue till acceptance of their demand.

Meanwhile, the Senate Committee on States and Frontier Regions (Safron) held its meeting in Islamabad chaired by Senator Taj Muhammad.

The committee chairman had summoned the heads of the Higher Education Commission (HEC), Pakistan Medical and Dental Council (PM&DC) and Engineering Council to discuss the proposal of doubling the quota of tribal students in the medical, dental and engineering colleges for the next 10 years. However, unfortunately, none of the summoned heads from the HEC, PM&DC or Engineering Council appeared before the committee.

The committee also discussed the issue of non-payment of salaries to Levies personnel.