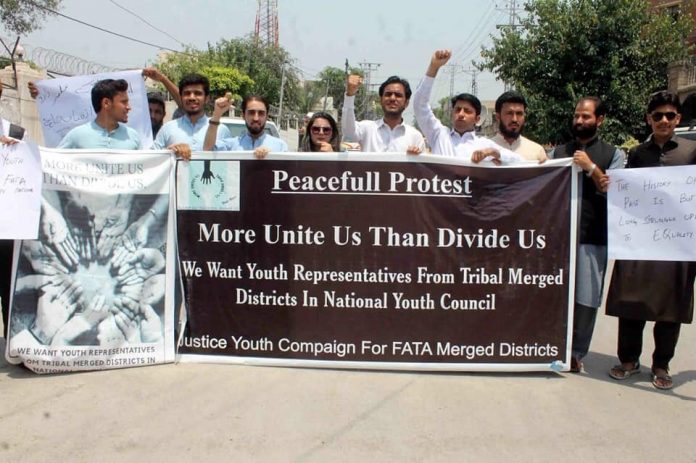 PESHAWAR: Tribal youth on Tuesday staged a protest outside the Peshawar press club asking the federal government for representation in the Nation Youth Council for tribal districts.

The protestors asked Prime Minister Imran Khan and Advisor to PM on Youth affairs Usman Dar to reconsider the decision and give the tribal youth representation in the Youth Council to raise the issue of tribal districts.

On June 30, the cabinet division notified the first-ever 33 member National Youth Council. PM Khan is the patron-in-chief and Punjab Chief Minister Usman Buzdar is the chairman. The notification added its agenda will be uplifting youths for development and prosperity and to add youth to the decision-making process at the national level.

Wafa Wazir, who is active for the right of tribal youth, told the media that the federal government has issued a notification of 33 members youth council which has representation from all the parts of the country, but the tribal area has been ignored.

“It is a matter of much disappointment for the Tribal youth,” said Wafa Wazir while talking to media outside the press club. Wafa said that the people of tribal areas have been kept deprived of their rights and basic facilities of life since the creation of Pakistan. She added that for the people of tribal districts, the government of Pakistan Tehrik-e-Insaf (PTI) was a ray of hope, but the recent decision shows that this government is also following the footsteps of past governments.

A youth activist from Bajaur Akbar Chand while talking to the media outside the press club said that the presentation of tribal youth is much important in the national Youth council as tribal people are more affected due to wars. Therefore, people of these areas should have a voice in the policies made for their area. He added that the people of tribal areas could give better policies for their own areas.

The protestors warned the federal government that if they were not given representation in the national Youth council, they will stage a massive protest in Islamabad.