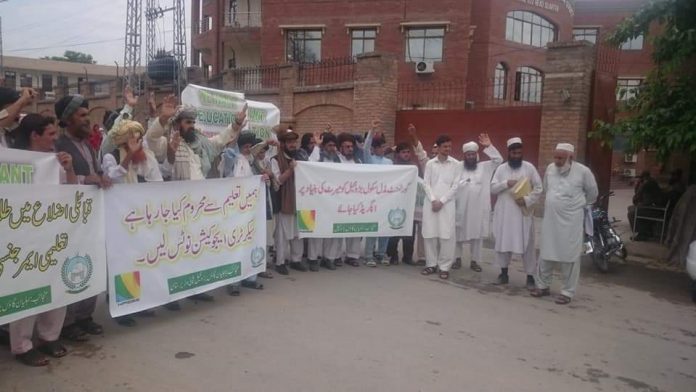 PESHAWAR: Tribal elders of North Waziristan staged protest outside the Peshawar press club demanding the government to provide them with education facilities in their tribal district and stop violation of their basic rights of education.

The tribal elders of Barru Khel were holding placards inscribed with slogans for the rights of education in their area, which they said, has been kept deprived for generations. The tribal elders alleged that merit is being violated in tribal districts where, despite the merger and tall announcements, no developments scheme in Education is initiated.

They protested flayed the government for not upgrading the government middle school Barro Khel to high school level, which was already approved by deputy commissioner of North Waziristan, Abdul Nasir. The protestors revealed that there are 371 students in the schools but they are forced to study in a three-room school, without any facilities. They said that not upgrading the school despite the approved feasibility which a gross violation of merit. The protestors said that despite the fact the deputy commissioner has given approval but the education officials are reluctant to upgrade the school.

They accused the planning officer and another officer of the education department for demanding money from them due to which the school is not being upgraded to high school level. The tribal elders demanded Governor Khyber Pakhtunkhwa Shah Farman and secretary education to investigate the matter and provide them with a school where their children get education.

The protestors also asked the government to set up schools in populated area on merit. After their protest outside the press club, the tribal elders also gathered outside the Khyber Pakhtunkhwa assembly and blocked the road in protest for their demands.