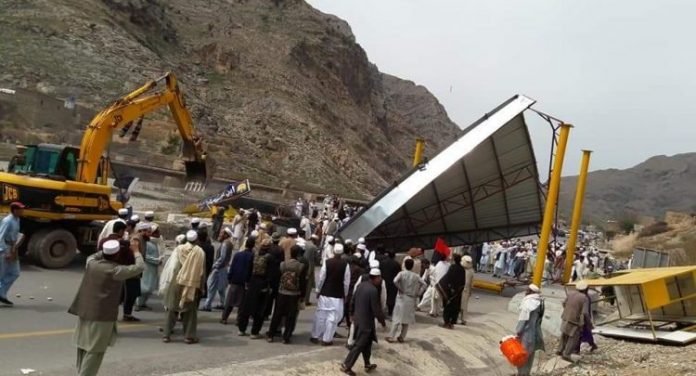 LANDIKOTAL: The local tribesman on Saturday demolished a toll plaza established on the Pak-Afghan Highway in Landikotal sub-division of Khyber tribal district.

Levies sources said the local tribesmen gathered in Kata Kashta area in Landikotal in the morning and demolished the toll plaza at the Pak-Afghan Highway which was established to collect toll tax from heavy vehicles using the road.

The transporters of Khyber tribal district were holding protest against the establishment of the toll plaza for the last one week due to which the highway remained closed and the Pak-Afghan trade also came to a halt. They opened the highway on assurance of the authorities concerned to resolve the issue, but again resumed protest when officials at the toll plaza did not stop collecting toll tax.

The transporters are of the view that the tribal districts have been exempted from all kind of taxes for the next five years in the merger plan. They said the establishment of toll plaza at the highway was illegal and they will never pay taxes as was promised with them.

The protesters said the establishment of the toll plaza by the National Highway Authority (NHA) in the tribal district was against the principles of the merger plan. They said KP Governor Shah Farman had also assured the transporters that they will be exempted from toll tax and other taxes. They said they will oppose any such moves by the government. They said the government instead of providing jobs to the tribal youth are teasing the employed youth by imposing taxes.

The toll plaza was established in Kata Kashta area on the highway three months ago.

The demolishment of the toll plaza has now created an uneasy situation and officials are yet to respond to this development.