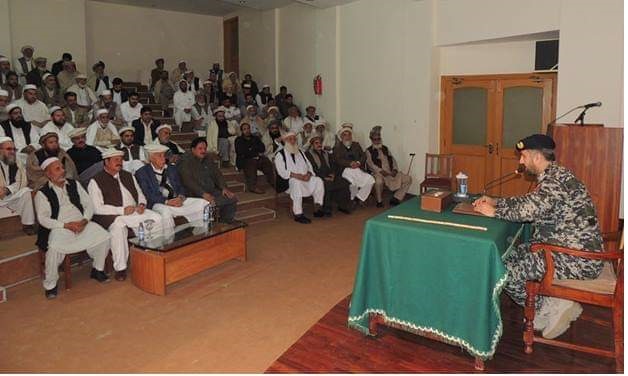 BARA: Commandant Swat Scouts Muhammad Tahir Khattak has said India will get a jaw-breaking response form the armed forces of Pakistan if it dared use aggression against Pakistan.

Addressing a Grand Jirga of tribal elders of Mallagori, Jamrud, Mohmand and Warsak Killi at Swat Scouts headquarters in Mallagori area of Khyber tribal district on Thursday, Tahir Khattak said the armed forces of Pakistan have offered countless sacrifices for the security of the country and they are prepared to give a befitting response to India if it indulged into any misadventure.

Tahir Khattak in his address urged the tribal elders to remain vigilant in the event of any emergency situation owing to the ongoing tension with India. He urged the tribesmen to pinpoint criminal elements and form defence committees on local level to avoid occurrence of any untoward incident.

The Swat Scouts commandant paid tribute to the valiant people of the tribal districts for their sacrifices for the country.

The tribal elders said the people of Khyber and Mohmand tribal districts are standing with the armed forces of Pakistan to thwart any enemy threat. They said the formation of armed militias is continuing within the tribes which will fight for the country if needed. The elders assured the commandant that they will never hesitate to sacrifice their lives for the security of the country in time of need.

The tribal elders assured that they will stand shoulder to shoulder with the security forces in the event of any misadventure by India. They said they will never hesitate to offer any sacrifice for the country, like they did in the past.

The deputy commissioner said war is no solution to any problem, however, Pakistan will have to fight for its defence.