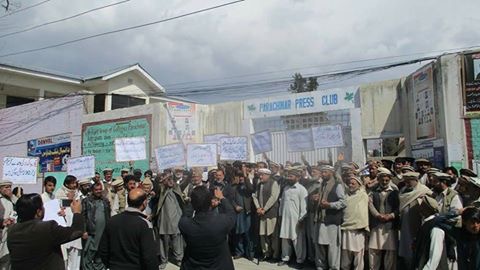 PARACHINAR, 06 March: Farmers took out a protest rally here on Monday against ban on urea and fertilizers by the political administration.

The rally started from Masjid road and after passing through different routes, culminated at the press club.

The protesting tribesmen were of the view that the political administration had imposed ban on the sale and use of urea fertilizers for the last three years in the agency due to which their fields did not produce desired crops.

They further added that the local traders had also been facing millions of rupees losses due to the ban on the product.

A farmer who was participating in the rally told that some traders had been illegally importing fertilizers from Afghanistan which were being sold to the local farmers on exorbitant rates.

The tribesmen threatened to hold protest sit-in outside the Parliament House in Islamabad and Governor’s House in Peshawar if the ban on sale of urea was not lifted.