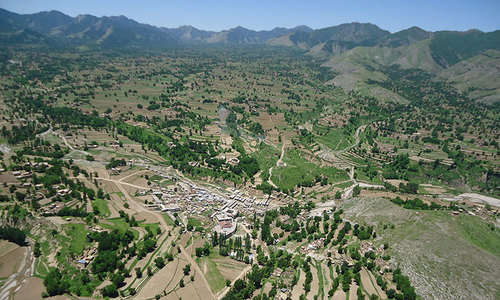 BARA: The elders of Malikdinkhel tribe in Bara tehsil of Khyber tribal district have called upon the government not to change the original site of Sheen Kamar Road.

The demand was made at a Grand Jirga of Malikdinkhel tribe here on Monday which was headed by Malik Sohbat Khan Afridi. The tribal elders said during the Jirga that the mega project of the 38-kilometre road to be constructed with the cooperation of USAID should not be made controversial by making changes in its site to benefit a particular tribe. They said the project was originally designed to benefit the whole population of Bara tehsil, not a particular tribe.

The elders said delay in construction of the road will be considered a conspiracy against Afridi tribe. They expressed apprehensions that the project will suffer setback if Sheen Kamar Dwatoe road was ignored in it. In such a scenario, they feared, two main tribes, Malikdinkhel and Kamarkhel, will remain deprived of the benefits of the project. They said the road should pass through Nala Malikdinkhel and Sur Dhand and linked to Sheen Kamar. They said the tribesmen will stage protest if their demands were ignored.

The elders said they had conveyed their grievances to the KP governor over the issues. Besides protest, they said, they will also explore legal options if their genuine demand was not accepted.

The government has launched several projects in the tribal districts, including Khyber district, after merger with Khyber Pakhtunkhwa to fulfil its pledge of bringing the tribal areas on par with developed areas of the country. Prime Minister Imran Khan flanked by federal and provincial ministers paid a visit to North Waziristan recently after which several provincial ministers visited the tribal districts and announced various schemes and projects. However, the government also faces resistance from the anti-merger people over carrying out its merger plan. The differences among tribes over details of some projects is also emerged as a stumbling block.