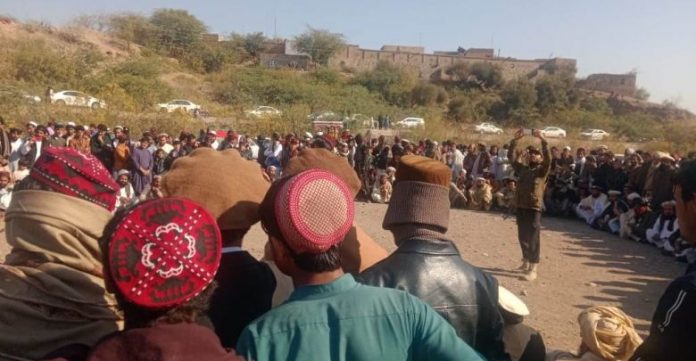 They announced to resist the Dam construction until their apprehension are addressed and their rightful demands are fulfilled.

The Jirga was called in Shawa Tehsil by the district administration in which tribal elders and Assistant Commissioner, Mir Ali Tehsil, Yousaf Karim Kundi participated. The tribal elders said that the government has so far not announced any compensation packages for those affected due to the construction.

“Some 0.3 million population of the area will be inundated. The government has failed to allocate an alternative land for them,” said tribal elders. “We do not trust the official’s assurances and will launch protests against the construction of the dam.” The notables after the failures of talks told the media that neither the district administration nor the Wapda team took the locals into confidence about the social, economic and environmental impact of the dam.

The elders of Kabalkhel tribe alleged that the government is violating the law and appealed to Prime Minister Imran Khan to take notice of the matter. They said they will also stage sit-ins in Peshawar and Islamabad in protest against the construction of the Dam.

Assistant Commis­sioner Yousaf Kundi addressed the Jirga and said work on Phase-2 of the dam is not launched yet. He assured that the tribesmen will be taken into confidence before initiation of work on the project. “We will take the elders of the Kabal Khel into confidence before starting any construction work,” Kundi assured the elders. “The government will compensate the tribesmen and will alot alternative lands as well.”

The government officials believe that with the construction of the dam, not only the barren land will be irrigated but it will also help in the flood control. However, the Kabalkhel elders doubt the government officials will keep their promises and said the government has not even made an estimate of the possible loss due to the new construction. The elders asked the Prime minister to take notice otherwise they would move to Islamabad to hold a protest for their rightful demands.

On the other hand, residents of Spin-warm tehsil of North Waziristan have also expressed apprehensions regarding the construction of the dam. They said that there is no doubt that it will irrigate barren land but it will also inundate a lot of their fertile land.