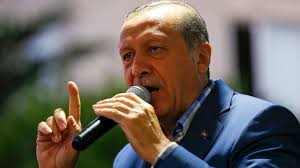 Tayyip Erdogan has won the high-stakes election by defeating the fierce opponent Muharrem Ince in the first round of presidential poll, media reports said.

Mr Erdogan with around 53% votes emerged as victorious while his closest rival Muharrem Ince who was expected to put up a fierce fight secured 31%.

Addressing the nation from the balcony of Justice and Development (AK) Party headquarters in capital Ankara after his election victory, Erdogan said every one of the 81 million Turkish citizens is a winner.
“Winners of June 24 elections are Turkey, Turkish nation, sufferers of our region and all oppressed in the world,” according to state media.

The opposition is yet to officially concede but said it would continue its democratic fight “whatever the result”. The final results will be announced on Friday, BBC reported.

According to media reports he would now assume sweeping new powers he had acquired in the last year referendum dubbed by many as controversial.

Under the new system, the office of prime minister will be abolished, parliament’s powers will be curtailed, and the president is accorded wide-ranging executive authority. This means he will have the power to appoint top officials including ministers and vice-presidents directly, intervene in the country’s legal system, and could impose a state of emergency.

In the last 15 years of his rule, he presided over a strong economy and built up a solid support base by investing in healthcare, education, and infrastructure. But he is also reported to have polarised opinion, cracking down on critics and putting some 160,000 people in jail.

According to BBC “Mr Erdogan was prime minister for 11 years before becoming president in 2014. Under the new constitution, he could stand for a third term when his second finishes in 2023, meaning he could potentially hold power until 2028.”

Russia was the first to congratulate Erdogan on his re-election, saying the outcome of the vote fully confirms Erdogan’s great political authority, broad support of the course pursued under his leadership towards solving vital social and economic tasks facing Turkey.