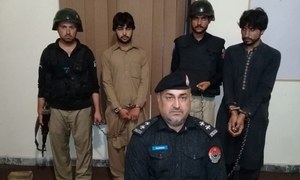 Police said the accused have been arrested after the transgender person who was tortured shared his video on the social media. The eunuch alleged in her social media post that clothes of her and her friend were torn during a function in Nowshera and when they went to District Headquarters Hospital for treatment, doctors and other staff also subjected them to torture. She further alleged that they were subjected to sexual abuse after the function.

On the complaint of the transgender person, the two accused who allegedly tortured them at the function have been arrested, while no action has been taken against the hospital administration.

Several incidents of violence against transgender persons have been reported in Khyber Pakhtunkhwa recently.