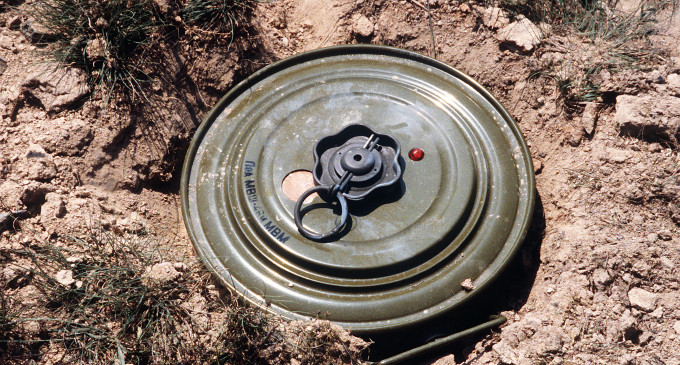 BARA: Two personnel of the bomb disposal squad (BDS) were injured in a landmine explosion in Khyber tribal district on Friday.

Local sources said two officials of the BDS were clearing landmines from the remote mountainous Seswa area of Sepah tribe in Bara sub-division when one of them stepped over a landmine planted under the ground. Both the officials were injured in the landmine explosion.

The sources said the BDS officials have defused about a hundred landmines in the area so far. The operation to clear landmines was initiated on the request of the local population.

After the return of the temporarily displaced persons (TDP), several incidents of landmine explosions occurred which caused many casualties. The militants while leaving the region after the military operation planted several landmines which have trapped several people so far. This led of an uneasy situation in the region and people demanded clearing of these landmines. Hundreds of landmines have been removed from the area for which the local population has thanked the security forces.

The landmine blast in Khyber tribal district happened a day after an elderly woman was injured in a similar blast in Tabi Tolkhel area of North Waziristan tribal district.

According to official sources, the 90-year-old Dawar Bibi was collecting firewood from the nearby area when she stepped on a landmine. The woman was critically injured and was shifted to the Combined Military Hospital (CMH) in Bannu.

People in Waziristan say their areas are still littered with mines and IED.

Meanwhile, the security forces recovered a huge cache of arms and ammunition in Orakzai tribal district.

Official sources said unknown miscreants had hidden weapons underground for some sabotage acts. They said the Orakzai Scouts recovered hundreds of mortar shells, 37 rockets, 50 fuses, four rifles and shells. These weapons were likely to be used by terrorists for some sabotage activity which has been foiled by the security forces by their timely action. There were no reports about any arrests in the action.