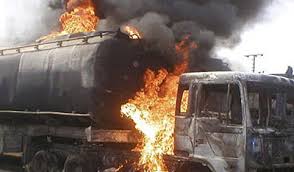 NOWSHERA: At least two persons have suffered burn injuries while trying to extinguish fire that erupted on an oil tanker near an oil depot in Taru Jabba.

Rescue 1122 spokesperson Bilal Faizi said that the injured were shifted to Lady Reading Hospital Peshawar. They were identified as driver and conductor of the tanker

He said that fire engulfed five more oil tankers due to blast in the first tanker, adding that around 40 Rescuers were trying to control the fire.

Immediate reasons behind eruption of fire could not be ascertained, he said, adding that the tankers were full of oil and standing for their turn to get empty.