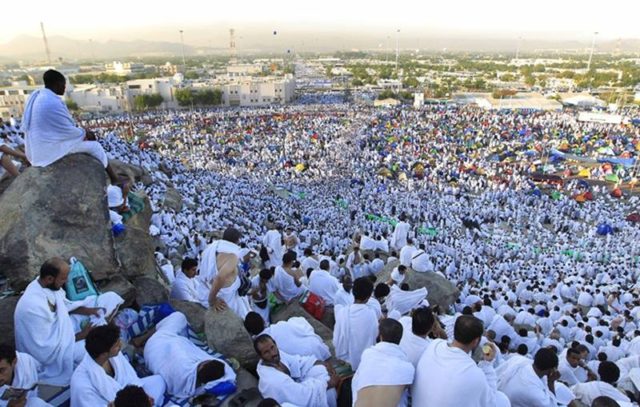 PESHAWAR: About two million Hajj pilgrims from around the world on Saturday converged in Arafat to perform the main ritual of the Hajj ‘Waqoof-e-Arafat’.

The pilgrims will listen to a sermon to be delivered at Masjid-e-Nimra and perform Zuhr and Asr prayers together. The Hujjaj will spend time in Arafat with prayers for acceptance of their pilgrimage and recitation of Quranic verses until sunset. After sunset, the pilgrims will head to Muzdalifah, where they will stay until midnight, engaged in prayers after performing combined Maghrib and Isha prayers.

Meanwhile, the annual ritual to change Ghilaf-e-Kaaba was held at Masjid al-Haram in Saudi Arabia. The new Ghilaf has been prepared at a cost of seven million Saudi Riyals. 670 kilograms pure silk, 120kg gold and 100 kilogram silver have been used in the Ghilaf. The covering cloth of the Kaaba, known as Kiswa, is changed on 9th Zilhaj every year on the day of Arafat.

The ritual of change of the Ghilaf started in the age of Hazrat Ismail (AS) and the Holy Prophet Hazrat Muhammad (Peace Be Upon Him) ordered change of Ghilaf-e-Kaaba after the conquest of Makkah Mukarramah.

About two million faithful from across the globe have arrived Makkah to perform the religious obligation. A total of 200,000 pilgrims from Pakistan are also performing Hajj according to quota given by Saudi Arabia.

Pakistan Hajj Mission has made comprehensive arrangements for the facilitation of Pakistani pilgrims in Mina. Information desk, lost and found section, call centre, and complaint cell have also been established in Mina to help and guide Pakistani pilgrims. Over 600 Movineen (helpers) and 2,000 volunteers are also in the field to extend any assistance to the pilgrims.

The Saudi government has also made elaborate security, healthcare, and civic arrangements for the pilgrims. The scale of the Hajj pilgrimage presents a vast security and logistical challenge, with tens of thousands of safety officers deployed to ensure smooth going.

Hajj is one of the world’s largest religious gatherings and one of Islam’s five pillars and must be undertaken by all Muslims with the means at least once in their lifetime.