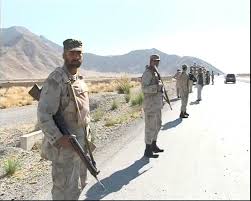 QUETTA, 27 November: Two private security guards accompanying officials of a Chinese oil and gas exploration company were killed when militants opened fire on the vehicles of the company in Pasni tehsil of Gwadar on Saturday.

Security sources said four officials of the Chinese company CGE along with three drivers and three private guards were travelling for a survey when the militants riding four motorcycles opened fire on them in Dando Kalanch area.

One of the slain security guard, Tariq belonged to Swabi district of Khyber Pakhtunkhwa, while another deceased guard, Aslam belonged to Sialkot district of Punjab. The militants escaped from the scene after committing the crime.

The Quick Response Force personnel reached the area after the incident and launched investigations.