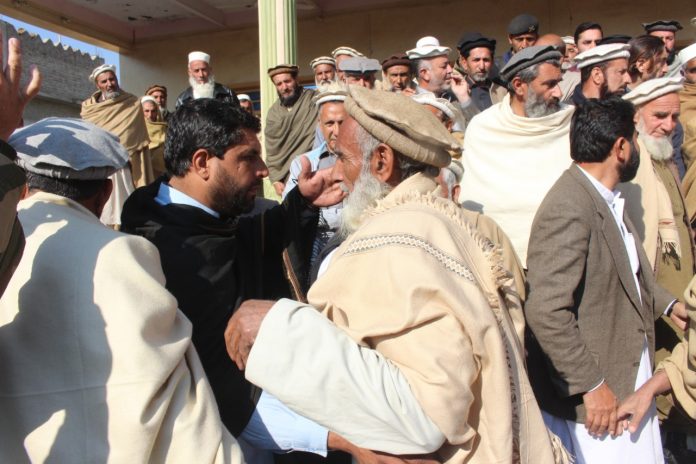 KHAR: With the efforts of a local Jirga, two rival group in Bajaur tribal district on Thursday announced to end their enmity and vowed to remain peaceful in future.

In this regard, a ceremony was arranged at the hujra of local tribal elder Malik Manjafar Khan in Tani Mamond area where local elders, administration officials and tribesmen arrived to witness the occasion. On the occasion, Malik Niaz Muhammad and Gul Sharif from one group and Malik Munir, Umra Khan and Bacha Mir from the other group announced to end their 38-yuear old enmity. The elders from both groups hugged each other and vowed to forget the past and live peacefully in future.

Both the groups were in enmity with each other over share in the combined land and two people, Ameer Muhammad and Kashmir, were killed during various clashes. The dispute also meant that there was no cultivation on the said land for the last 38 years and the land was laying barren.

Due to continuous efforts of tribal elders Malik Manjafar Khan, Malik Habibullah, Malik Mashooq and others, the rival groups agreed to end the enmity.

The tribal elders said on the occasion that Islam is a religious of peace and brotherhood. They said all the Muslims are brothers and Islam forbids people from feuds and bloodshed. They said it is the Sunnah of the Holy Prophet (Peace Be Upon Him) to forgive others. The elders said it is collective responsibly of the citizens to play role to form a peaceful society.

The local people appreciated the efforts of the Jirga to bring peace in the region and felicitated it for its success.