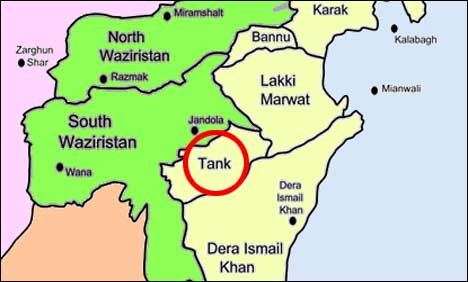 TANK: Two security personnel lost their lives and another was injured in firing by unknown miscreants in Tank district of Khyber Pakhtunkhwa on Wednesday.

The bodies and the injured were taken to hospital, while the security forces cordoned off the entire area and launched a search operation. However, there was no word about any arrest till filing of this report.

On January 18, rockets fired from Afghanistan landed in civilian areas of Bajaur tribal district. However, no life loss was reported in the rocket attacks.

TNN correspondent reported that the rockets fired from Afghanistan landed in Mulla Killi an Laghrai Bazaar areas near the Pak-Afghan border.

The Pakistan Army troops were responding to the attacks in a befitting manner.

The same day, two terrorists were killed, while another was injured during an intelligence-based operation (IBO) in Nargosa area of South Waziristan tribal district, Inter-Services Public relations said.

The military’s media wing said the security forces conducted an operation in Nargosa area of South Waziristan. During intense fire, it said, two terrorists, Usman Ali and Waheed, were killed and one got injured and apprehended.

The killed terrorists were active members of the banned Tehreek-e-Taliban Pakistan (TTP) Sajna group and were improvised explosive device (IED) experts, terrorist trainers, motivators, and were involved in attacks on the security forces.

On January 15, a professor was shot dead by unidentified armed men in North Waziristan.

Professor Dr Walliullah was travelling from his village in Bannu to Mir Ali when he was shot dead by unknown armed men at Mir Ali Bypass Road at 10:00pm. He was a professor of pathology at Bannu Medical College.

On January 14, three soldiers of the Pakistan Army were martyred and two terrorists were killed during two separate IBOs on terrorists’ hideouts in North Waziristan tribal district, the ISPR) said on Thursday.