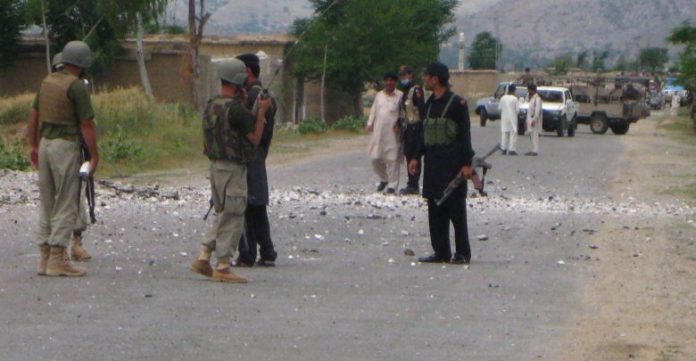 PESHAWAR: An explosion caused by an Improvised Explosive Device (IED) has left an army major and a sepoy martyred while four others sustained injuries in Niag Banda in the Mamond tehsil in Bajaur district, official sources said.

The official sources said a vehicle of the security forces was attacked with a remote-controlled IED planted on the roadside due to which a major and a sepoy were martyred. Four soldiers, the sources said, were injured in the terrorist attack. The martyred were identified as Major Saqib and Sepoy Maroof. The wounded soldiers included Arif, Suhail, Imran and Niaz Ahmad.

The injured were shifted to the District Headquarters Hospital in Khar. Soon after the incident, the security forces cordoned off the area and launched a search operation, but no arrests were made.

MOHMAND: More than 1000 thousand patients visited the Pakistan army free medical camp during the last four days, says a statement issued on Tuesday. 30 specialists doctors and 70 paramedics staff provided free medications. A statement released said that more than 10000 patients from the far-flung area of the tribal district Mohmand arrived at the camp get free medications.

The patients were included 3036 children, 3022 women, and 3872 male who were also provided free medicines on the spot. It was further informed that specialist doctors have also performed 75 eye surgeries, 100 diagnosis tests and 291 X-rays. During the four days camp, 11 volunteers from the tribal district also participated and provided the necessary support to old and physically weak patients on the spot.

On the second day of the camp, Major of Pak army medical corps Shehla Baqai and commandant CMH Peshawar Brigadier Muhammad Farooq visited the camp along with journalists from Peshawar. Tribal people from the far-flung areas have visited the camp and appreciated the effort of the Pak army.