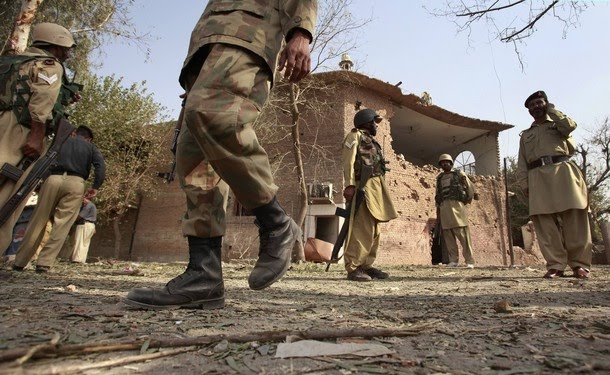 MIR ALI: Two terrorists were killed in a clash with the security forces in Mir Ali sub-division of North Waziristan tribal district on Tuesday.

The intelligence-based operation in North Waziristan happened two days after a cross border attack by militants on the security forces in which six soldiers had embraced martyrdom.

The sources said the incident happened near the Pak-Afghan border. The security forces reached the spot immediately and launched a search operation in the area. However, no arrests were made till filing of this report. No banned outfit has claimed responsibility for the attack.

On the same day, a contingent of the Frontier Corps (FC) was attacked by unidentified terrorists during a combing operation between Hushab and Turbat in Balochistan in which four soldiers were martyred, the ISPR said. The troops martyred in Balochistan included Captain Aqib Javed, and Sepoys Nadir, Atif Altaf and Hafeezullah.

“The martyrdom of six soldiers on the Pak-Afghan border and of four in Balochistan is the sacrifice Pakistan (is) making for peace in the region,” Director General ISPR Major General Asif Ghafoor tweeted. He said security of the tribal districts has improved with efforts of security forces.

Despite completion of a massive military operation Zarb-e-Azb and return of temporarily displaced persons to North Waziristan military personnel often come under attack in the area as militants still have presence in some patches. In retaliation, the security forces also conduct IBOs in troubled areas.