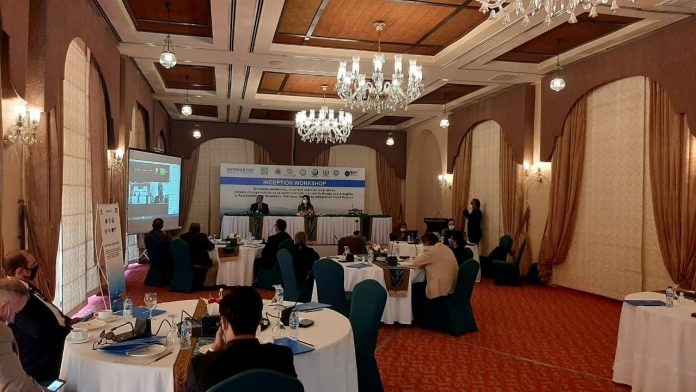 PESHAWAR: Reducing the impact of flooding and droughts is becoming one of the top priorities of the Government of Pakistan. The flood and drought impacts are often severe in urban areas, a national approach to address this situation in cities doesn’t exist in Pakistan. This is critical, considering that 36.4% of Pakistan’s population lives in urban areas.

The project developed by UN-Habitat in collaboration with the Government of Pakistan and other stakeholders funded by the adaptation fund was formally launched on 22 December 2020 with an Inception Workshop attended by 37 relevant members from the local, provincial and federal government ministries and line agencies of Pakistan. The Adaptation Fund of USD 6.094 million project aims to enhance resilience to water scarcity, caused by floods and droughts at community level, district/city and national/provincial level in Rawalpindi and Nowshera cities, says a press release.

The project will install rainwater harvesting units both at household level and public buildings to demonstrate cost-effective solution to adapt to both floods and droughts. To scale the project’s approach, a national urban strategy will be developed, focusing on climate change impacts, particularly floods and water scarcity (and resulting public health problems), while also employing a spatial planning approach. The project will be implemented by UN-Habitat, Ministry of Climate Change, National Disaster Management Authority, Pakistan Council for Research on Water Resources, Shehrsaaz and communities. In light of the current Covid-19 crisis, the rainwater harvesting units are extremely relevant as these interventions will improve the hygienic conditions of the local communities. The needs of the most vulnerable will be considered at all stages of the process.

At the Inception Workshop, Jawed Ali Khan, UN Habitat Programme Manager, UNHabitat, Pakistan after welcoming the Acting Resident Coordinator UN, DG MOCC, Human Settlements Officer ROAP, and delegates, highlighted that today’s event marks the launch of the urban flooding and drought management intervention in Pakistan that poses a serious threat to our economic growth and development as well as lives and livelihood of the people living in the urban areas of the country.

Mio Sato, Acting Resident Coordinator UN appreciated the efforts of MOCC and UN Habitat for launching the climate change adaptation project. Climate Change and Environmental Sustainability has been one of the priority of United Nations. She emphasized UN common approach mainstreaming in projects and programming to pave the way for a sustainable flood and drought management at all levels and create a model for climate resilient urban development and management in Pakistan.

Irfan Tariq, DG MOCC explained that Pakistan is one of the severely climate change impacted country although its GHG emissions are low. Climate Change adaptation is the priority of Government of Pakistan. In this context this project is important and would be curtain raiser for adaptation activities and will be instrumental in building climate change-related resilience in Rawalpindi and Nowshera. districts. He reaffirmed the commitment of local authorities to provide support for a successful implementation.

Laxman Perera, HSO ROAP while thanking the participants remarked that the launched adaptation fund project will be the benchmark in the region of how climate change issues are addressed to enhance the capacity at national, provincial, district and community level. The components are aligned with national policies as well as UN Habitat global flagship programmes to promote climate resilience.