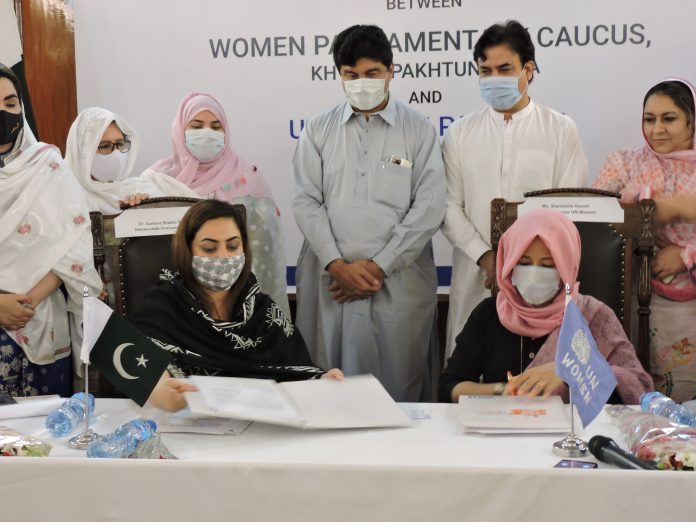 PESHAWAR: UN Women and Women Parliamentary Caucus (WPC) of the Khyber Pakhtunkhwa Assembly fostered their partnership by signing a Memorandum of Understanding (MoU) to advance Gender Equality and Women’s Empowerment (GEWE) agenda with a renewed focus on strengthening rule of law in the KP.

The joint efforts will support the government institutions in drafting effective policies and action plans, build capacity and enhance accountability mechanism to protect, enable and promote rights (social, economic, political, and access to justice) of marginalized groups, especially women, including those from the newly merged districts, says a press release.

During the signing ceremony, Dr. Sumera Shams, Chairperson of WPC said, “While having the same mandate as that of women’s empowerment, the partnership between UN Women and WPC KP will further strengthen the pro-women legislation and implementation of those laws across the province as well as the deprived tribal belt.”

Sharmeela Rassool acknowledged the efforts of the WPC in furthering the GEWE agenda in KP and shared that the joint efforts will be pivotal in realizing and safeguarding the rights of women and girls.

“In the past, UN Women supported the WPC in finalizing KP’s Women Empowerment Policy and contributed in mainstreaming gender in two draft bills. Now, we are taking a step forward by advocating for effective implementation of laws and policies.”

Moreover, UN Women and WPC will work together for increased awareness-raising and capacity building of local government representatives, WPC members, parliamentarians, and political parties to better understand the challenges in strengthening rule of law and undertake concerted efforts to overcome those challenges.

“Together we can make a change. The development sector and Government are the two wheels that run the reformative system. The partnership with UN Women will aim to achieve a robust response in the area of gender equality and women empowerment”, said Mahmood Jan, Deputy Speaker KP Assembly.

The UN Women Pakistan and the Khyber Pakhtunkhwa Judicial Academy (KPJA) also signed an MoU to take forward their partnership in advancing the agenda of GEWE, and support platforms to ensure that the justice sector stakeholders are gender sensitized in their approach when dealing with women survivors of violence in light of national/provincial policies and international best practices.

Both organizations will be working closely to strengthen the response mechanism and to create an enabling environment that supports survivors of gender-based violence.

At the signing ceremony, Ms. Sharmeela Rassool, said, “Over the years, Pakistan has worked towards creating progressive legal frameworks to safeguard the rights of women and girls. The implementation of the law remains imperative for real change on the ground. Only a gender-sensitive, systematic and coordinated response mechanism from the state, the judiciary, legal community, and other stakeholders will be important to improve women and vulnerable communities’ access to justice.”

She also appreciated the efforts of the provincial government on their progressive steps to take forward the agenda of GEWE.

Zia-ud-Din Khattak highlighted that the Constitution of the Islamic Republic of Pakistan guarantees equality before the law and equal protection for every citizen, and thus, he committed support of the Judicial Academy in the effective dispensation of justice to everyone without any discrimination.

“This MoU will contribute towards building the capacity and commitment of all the stakeholders of the justice sector in creating an enabling environment for delivering justice to women, especially survivors of gender-based violence in light of the Rule of Law Road Map of KP,” he said.