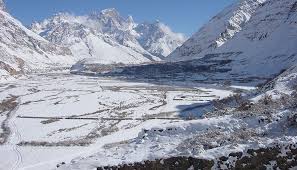 The LoA was signed by Mr. Syed Abrar Hussain, Additional Chief Secretary (Development)/Secretary P&DD Gilgit-Baltistan and Mr. Ignacio Artaza, Resident Representative a.i., UNDP. The LoA aims to strengthen coordination between the two parties and facilitate the implementation of activities as approved by the Project Steering Committee.

Mr. Ignacio Artaza, recalling his recent visit to several glaciers in Hunza, expressed his concern about the potential impact on local communities of glacial melting, underscoring the need to fast-track work on the ground, including the procurement and installation of sensors for early warning purposes.

In 2010 the Booni Gol Glacier, located near Chitral, generated an outburst flood that killed 1,980 people, injured an additional 2,946 more, and destroyed some 1.6 million homes. In addition, thousands of acres of agricultural lands were damaged as a result of this new-found risk that may threaten to undermine Pakistan’s efforts for peaceful and sustainable development.

The project will set-up early warning systems and automated weather stations to mitigate the impact of GLOFs. It also focuses on building small scale GLOF risk reduction infrastructure as well as promotion of water efficient and risk-informed farming technologies for the local communities. More than half of the project beneficiaries will be women.

Various studies suggest the existence of over 3,044 lakes as a result of melting glaciers in the Gilgit-Baltistan and Khyber Pakhtunkhwa of which 36 are considered hazardous, putting some 7.1 million people at risk.

Led by Pakistan’s Ministry of Climate Change, with support from UNDP and funding support from the Green Climate Fund (GCF), the project targets the most vulnerable rural communities in the high-altitude regions of Gilgit-Baltistan and Khyber Pakhtunkhwa.

GB having a greater share of the glaciers of the country is more prone to said disasters which is why of the total 15 target districts, work will commence in 10 districts of GB.