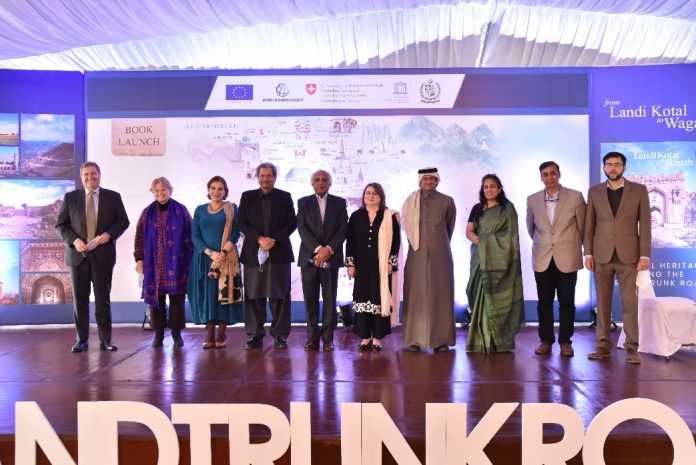 PESHAWAR: Unesco and the Government of Pakistan launched a new joint publication titled ‘From Landikotal to Wagah: Cultural Heritage Along the Grand Trunk Road’ at the Pakistan National Council of Arts, Islamabad.

The result of a collaboration of more than two years, the coffee table book explores the built and intangible heritage along the Grand Trunk Road (GT Road) in Pakistan, combining a thoroughly researched narrative with a wealth of photos that illustrate the diverse and rich panorama of this 2500-year-old historical trade road.

Over the centuries, the road has been extensively travelled by traders, pilgrims and great civilizations like the Greeks, Turks and Mughals who left their marks, perpetuating the mythical status of this legendary road. The aim of the book is to foster tourism, promote awareness and ultimately protect the little known historic sites (largely non-Muslim) along the GT road that spans over 2,400 kilometres from Bangladesh to Afghanistan, says a press release.

The development and publication of the book was supported by the Embassy of Switzerland, the European Union and the World Bank. The author is Salman Rashid, a preeminent travel writer and a Fellow of the Royal Geographical Society. The book is richly illustrated with photographs taken by Asad Zaidi. It is distributed in a co-publishing arrangement with Sang-E-Meel Publishers.

At the book launch, Patricia McPhillips (Country Representative and Director, Unesco) welcomed the guests and thanked all partners for their support and contribution. She stated that, ‘through this book, Unesco hoped to highlight the vast potential cultural development in various parts of Pakistan, and the pressing need to preserve and protect heritage sites, in order to further our shared cause of encouraging cultural pluralism and social cohesion.’

Welcoming the publication of the book, Bénédict de Cerjat (Ambassador of Switzerland) highlighted the rich and impressive cultural heritage of Pakistan. He emphasized that the Grand Trunk Road is one of Asia’s oldest and longest major roads, which has linked Central Asia to the Indian subcontinent, facilitated trade for centuries and is still used for transportation. He commended Unesco for its valuable initiative and encouraged the guests to follow the author’s journey and discover the many fascinating places along the historical road.

In her speech, Ms Androulla Kaminara (Ambassador of the European Union to Pakistan) emphasized: “Over the centuries, along the Grand Trunk Road not only goods but cultures, ideas, religions and languages were exchanged, leaving a permanent trace on the societies along the road today. This rich heritage is an important manifestation of cultural diversity that needs to be protected and promoted, especially for its key role in attracting tourism and boosting economic growth – which are both priorities of the Government of Pakistan.”

The author of the book Salman Rashid spoke about the many years he has spent traveling along the GT Road, and the fascinating history and culture he has experienced in his travels, which can now be shared with readers through this book.

The chief guest Shafqat Mahmood, Federal Minister for the National Heritage and Culture Division, appreciated the role this book will play in fostering tourism, while also preserving the history and heritage of Pakistan for generations to come.

All partners emphasized that this unique book serves to encourage the people and government of Pakistan to protect and preserve the heritage which forms an integral part of the history of the land that is now Pakistan. The book will be available for sale online and in major bookstores after February 10, 2021.